Three may not be enough to call a flock, but this trio of musicians is enough to make a tribe … The Bird Tribe.

Lead singer and keyboardist Matthew Frost (whose left hand serves as the band’s bass player), pedal and lap steel guitarist Brian Byrd, and drummer/percussionist Garrett Dawson … are completely in tune (no pun intended) in that their intention is to communicate at a slightly if not higher then certainly different level not intended as mere backdrop for drinking and dancing but actually makes for compelling listening.

Which isn’t to say you don’t get exciting vocals (often with a touch of such influences as John Lennon, Jim Morrison, Seal, Buffalo Springfield and others), smokin’ guitar solos (pretty hard to believe those shredding sounds are coming out of a laptop or pedal steel), or Dawson’s folkloric rhythms and steady support of the groove. Let’s just say they’re hot enough to have completely blown out the power one night at a Siesta Village Gilligan’s gig, and when they played WMNF’s Live Music Showcase (one of the last bastions of live music on radio), host Bill Dudley described their music as “red hot!” That show, by the way, is archived on YouTube, offering about an hour of listening to The Bird Tribe (minus the occasional pledge drive pitch) and there are also tracks on YouTube from their new CD Stars in Disguise.

No newcomer to this business, Frost’s father (and teacher since the age of three,) was the original keyboard player for Grand Funk Railroad and a 30 year member of Bob Seger’s Silver Bullet Band. Byrd brings in his heavily influenced sacred steel sound from the House of God church in which he was raised, plus soul and blues influences with a heavy dose of good old rock and roll; Dawson has toured with Butch Trucks, Dickey Betts and Great Southern, and is featured on more than 40 studio recordings. He and Frost have worked together in many prior incarnations in others’ world and rock groups. With those backgrounds, these guys have nothing to prove and can fully concentrate on showcasing their music instead of themselves. 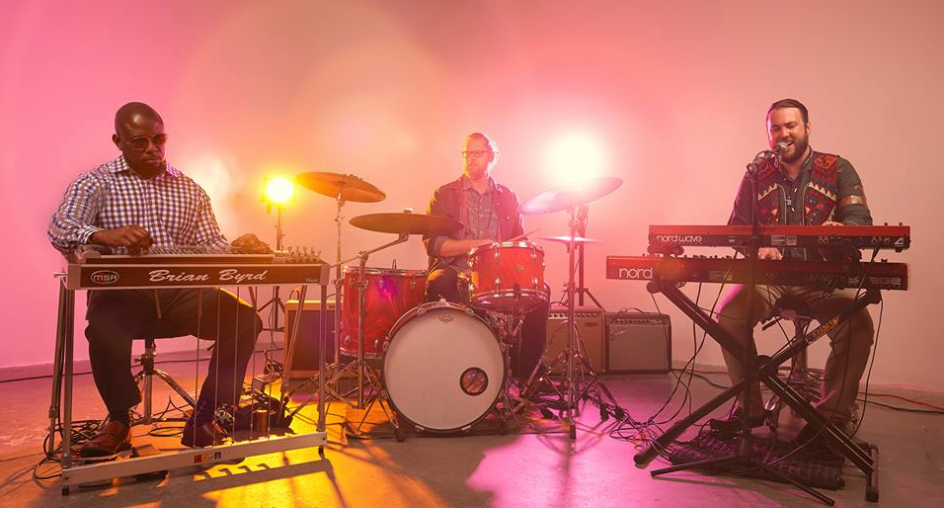 The Bird Tribe has mastered making music that is both exciting and meaningful. While their fans certainly enjoy the sometimes 60s-ish groove they’re putting out there, they also tune in to a decidedly purposeful reach for what Frost describes as a “very positive and spiritual, but not ‘corny’ or ‘religious’” vibe.” With all the vitriol and poison rhetoric spewing from our social media and media in general right now, this music offers both an exciting escape and a welcome respite.

The group’s exciting October tour of Florida and Georgia in support of their just released and most excellent CD Stars in Disguise was exhausting and exhilarating, putting their music before people who until now hadn’t been aware of it, as well as being something of a validation for already established faithful fans such as the large Siesta Key contingency that drove a long way to be able to make a couple of the closer gigs and show their support.

An especially surprising turn of events came about during the tour when, at Skipper’s Smokehouse, Bird Tribe suddenly went from opening act to headliner; the other band’s transportation had broken down so suddenly instead of performing the opening set as prepared, the whole show was theirs. Surprise! It was a bit of a jolt, but a good one that they embraced and welcomed in their regular “universe unfolding as intended” calm acceptance.

If you haven’t heard The Bird Tribe yet, you are really missing something, Their original sound and compositions are nothing short of amazing, and while people sometimes tend to bestow this prediction a bit too freely, it really is incredibly likely … maybe predestined … that this group is going to go far, contribute much, and if you’re hip to it now you’ll be able to say you knew and heard them when. We wish them all the best, but selfishly kind of dread the day when the free shows in the intimate venues become a memory.

Get it while you can because the early Bird fan… no, just kidding, we won’t do that… but DO hear them now because, in all seriousness, The Bird Tribe is going to be flying way beyond Siesta Key one day soon.

Where to hear them in Siesta Village this month:

For CDs, general info and more:

Listen on www.youtube.com  by searching The Bird Tribe for connections to: