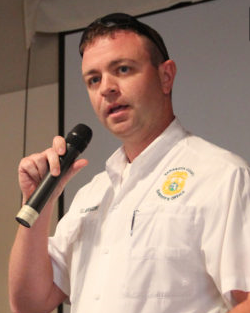 During the Sept. 6 SKA meeting, Sgt. Jason Mruczek of the Sarasota County Sheriff’s Office piqued audience members’ interest with his report of an early-morning incident in August on Higel Avenue, which resulted in several arrests.

On Aug. 9, two 16-year-old males were charged with Attempted Burglary of an Occupied Structure, while a 19-year-old woman was charged with Accessory after the Fact, according to reports that Kaitlyn Perez, community affairs director for the Sheriff’s Office, provided.

Just after 6 a.m. on Aug. 9, the owner of a home in the 5000 block of Higel Avenue called the Sheriff’s Office, after she saw two males in her carport, allegedly trying to break into her vehicle, one of the responding officers wrote. The woman yelled at them, “and they fled on foot toward the road,” the report said. They climbed into a white sedan, “which drove away at a high rate of speed,” the report noted.

Patrol units in the area were able to locate the vehicle, the report continued. When they attempted to stop it, however, it sped away, but it eventually crashed into the wall at the intersection of Siesta Drive and White Lane. By the time the officers reached the scene, the report said, the suspects had fled.

With the help of a K9 unit, deputies located all three suspects walking in the vicinity of Siesta Drive and Gulfmead Drive, the reports noted.

Sylvester Lee Sanders Jr., 16, of Sarasota, and Tydarius G. Washington, 16, of Fort Myers, both were charged with Attempted Burglary of an Occupied Structure. 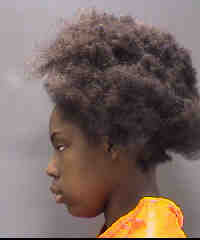 Takia C. Turner, 19, of Sarasota, was charged with Accessory After the Fact for driving the getaway vehicle, one report said. That is a second-degree felony. She was released under $1,500 bond, according to Sarasota County jail records.

Because Sylvester and Tydarius are juveniles, no arrest records were available for them.

Deputies later learned that a warrant had been issued for Tydarius because he had failed to appear in court on a matter in Fort Myers, his report pointed out.

Officers were unable to reach Tydarius’ legal guardian prior to interviewing him, the report noted, even though they made several attempts to do so. They were able to reach one of Sylvester’s parents, his arrest report said. After he was read his rights, that report noted, he “refused to make a statement.”

Later, when officers contacted the owner of the vehicle used in the Higel incident, one report added, the owner told them it had been stolen from her driveway overnight on Aug. 8.

About that Siesta Drive crash in June…

Say ‘I do’ with the sand between your toes