At the center of attention 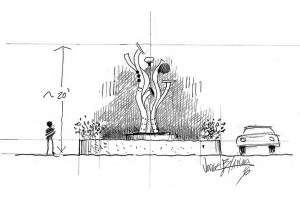 A second roundabout sculpture is in the works downtown, and it is already drawing attention. The city’s Public Art Committee decided Nov. 1 that a sculpture by local artist Jorge Blanco should be featured at the center of the planned roundabout at Ringling Boulevard and Orange Avenue downtown. The approximately 20-foot-tall, powder-coated aluminum sculpture called "BRAVO!" received the highest rank and unanimous approval among three finalists. Those finalists were chosen from among 162 submissions for the new roundabout.

Although all three were praised, Blanco's planned sculpture was described as joyful and fitting for the area of downtown, the five-member committee agreed. The committee's recommendation will be presented to the City Commission for final consideration this month. The three finalists each had up to 45 minutes to presentations in front of the Public Art Committee Nov. 1 before the advisory board made its final recommendation.

In April, the city unveiled the "Embracing our Differences" sculpture in the new roundabout at Main Street and Orange Avenue. The 20-foot-tall, multicolored piece received some mixed reviews. It was the first public roundabout sculpture in the city. The sculpture, entitled “Embracing Our Differences,” fulfills a public art requirement for the recently completed Aloft hotel and One Palm condominium developments.

More and more residents are voting early. Sarasota County set a record for early voting during this General Election. More than 79,000 voters sent their ballots through the mail or voted early, according to the Sarasota County Supervisor of Elections office. That is a 44% jump over early voting in 2012, and a 13% increase over the 2008 general election.

Early voting sites were open throughout the county for 14 days, until Nov. 5.

The Downtown Improvement District (DID) will spend the month of January honoring first responders who work in the city’s downtown. On Nov. 1, the group approved a $20,000 budget for First Responders Appreciation Month, scheduled for this January.

The group plans to produce flags and buttons for downtown businesses to display throughout the month and is working on getting other folks involved in the event, meant to show local first responders — including police officers and EMS/fire personnel — that the community supports them. Officials at Sarasota Military Academy and Sarasota School of Arts and Sciences will also participate in a letter writing campaign.

Sarasota Memorial Hospital maintains its top grade from the federal government’s official Hospital Compare website. According to the star rating list on the federal government's “Hospital Compare” website, Sarasota Memorial Hospital held onto the highest-tier ranking it received in July. It is one of 111 hospitals nationwide and the only one in Florida with an overall five stars. Star ratings for other area hospitals also remained unchanged: Englewood Community Hospital has four stars; Doctors Hospital of Sarasota, Lakewood Ranch Medical Center and Venice Regional Bayfront Health have three; and Manatee Memorial Hospital and Blake Medical Center have two.

The raises will include 3 percent increases to sworn and non-sworn personnel pay for 2014 and 2015 each and a new pay schedule for criminalists, also retroactively increasing pay from 2014 forward, according to the agreement reached Nov. 7. It will be the first time since 2008 that officers have received raises, and it comes with high praise for the roughly 150 police officers serving within city limits. In exchange for the raises, the new collective bargaining agreement gives more discretion on scheduling and minimum staffing to police-department management. The agreement comes after a long impasse between police union and city representatives. The City Commission unanimously endorsed the plan at a special hearing lasting more than four hours.

Walmart is opening up another store in Sarasota early next year. The new store, a Walmart Neighborhood Market, is being built on Palmer Crossing Circle in the Palmer Crossing Plaza, just south of Clark Road, and Walmart says it will hire 95 employees.

A temporary hiring center has been set up at 5549 Palmer Crossing Circle. The store is expected to open on Jan. 25. Store manager Dan Patt told My Suncoast ABC 7, the store will be hiring both full- and part-time associates. “We are excited to get to know applicants and start building a team to serve the Sarasota community,” Patt said.

Last year, the Sarasota County School District was one of only three in the state to start as late as Aug.22, with the Florida Legislature allowing openings as early as Aug. 10. Yet the board members recently voted unanimously to approve the advertising of calendars for the 2017-18 and 2018-19 school years as proposed by an 11-member committee comprising staff, teachers and parents. The starting date for the 2017-18 school year would be Aug. 14; for the following school year, Aug. 13. Both school years would end on May 24.

The board is scheduled to vote on the final versions of the school year calendars when it meets at 3 p.m. on Tuesday, Dec. 6.

Sarasota County’s Comprehensive Plan is the county’s guide map for the next decade of local growth. Sarasota County commissioners unanimously endorsed an update to that plan at the end of October.

Despite some criticism about development guidelines, county leaders OK’d the updates to the existing growth management plan. Some had criticized the updates for what they feared were relaxed development regulations and reduced environmental protection. Yet county administrators and county commissioners defended the new plan and policies. The updates provide safeguards against over-development and zoning rules governing growth and daily county operations, they said. Eighteen months ago, county staff began the undertaking to bring the plan up to date. In addition to reflecting present conditions in the county’s policies, staff also sought to simplify the technical document for the public’s use. The result is a two-volume document more than 1,300 pages long.

Residents at the Beneva Oaks apartments in Sarasota got a big surprise just before Halloween. Neighbors discovered a 6-foot-long boa constrictor slithering near the front entrance on Oct. 27.

Riled up and upset, this boa constrictor didn’t like it when Sarasota Police Officer Brian Lundstrum tried to round him up. It snapped several times, and tried to slither away. The snake tried to bite, and at times hissed, as the officer tried to corner it, according to a news account at News Channel 8. But the officer was finally successful in subduing the suspect by pinning the snake’s head with his baton.

The snake was taken to Sarasota County Sheriff Animal Services. Police officials hoped someone would claim it.

Frontier Airlines started new nonstop service from Punta Gorda Airport to Philadelphia, Chicago O’Hare and Trenton, New Jersey. The service is a second, low-cost carrier added to the Allegiant service at Punta Gorda Airport. Punta Gorda Airport, which didn’t even have commercial service a decade ago, has boomed in recent years with more than 30 percent annual growth.

Siesta Key Village Association to be merged into Siesta Chamber as of Dec. 31

A Vision for the Best

106-home development to be constructed in Gulf Gate