Up & Down the Trail
Compiled by Sue Erwin and Debbie Flessner

It’s difficult for many senior high school students to stay on track and keep focused on future career goals.

Gonzalez recently won the William E. Schmidt Youth Vocal Competition, which was hosted by the University of South Florida in Tampa in April.

“I heard about the Schmidt Competition last year through my vocal teacher, Mrs. Rosemarie Freni-Molinari,” Gonzalez said.
Gonzalez began studying music with Freni-Molinari when she was 14.

“When I became seriously devoted to classical singing, she suggested that I compete in the competition,” Gonzalez said. “I competed and won second place in 2013 and came back this year to give it another try before college.”

The application process was not difficult at all, according to Gonzalez, but the audition itself was a bit more of a challenge.
“Auditions can be extremely nerve-wracking if you’re not prepared — but I was fine,” Gonzalez said. “I love competitions — they are a chance to perform.”

The Venice High School senior is majoring in music-voice and found out recently that she was accepted and offered a scholarship to study at Manhattan School of Music. She plans to pursue a career in opera.

Downtown Sarasota continued its efforts to become a true evening

destination with the addition of two new business sure to draw in the crowds.

McCurdy’s Comedy Theatre and Humor Institute opened its doors on a new 4,000 square foot location at 1923 Ringling Blvd. A Sarasota comedy staple for 22 years, McCurdy’s was most recently in a spot north of downtown, but expects to draw in even more comedy fans to its more centralized warehouse.

In addition, Ker’s Wing House has moved into the building at 1991

Main Street that formerly housed the Half Shell Oyster Bar. The Wing House opened its first location in 1994 in Largo, Florida, and now has 24 sites around the state. The newest location in Sarasota is now the only true sports bar in the downtown area.

Local groups such as the Downtown Improvement District are in the process of discussing an expenditure of $1.3 million to improve Main Street, from Goodrich to US301, with brick intersections and better landscaping. The hope is that with popular businesses like McCurdy’s and the Wing House coming into the area, there will be incentive to make downtown even more attractive for the visitors who will be frequenting them.

Keep Sarasota County Beautiful will be conducting a beach cleanup on five county beaches the morning of July 5. The group is seeking volunteers to work from 7 to 9 a.m. at Siesta Beach, Lido Beach, Nokomis Beach, North Jetty Park and Ted Sperling Park.

All volunteers need to be pre-registered, either at the site or, preferably, in advance. When you arrive, you will get instructions and supplies like rubber gloves and garbage bags. The first 300 volunteers in the county to register will receive a special “Liberty Litter” t-shirt.

At the early June City Council meeting, City Attorney Bob Fournier presented a rewrite of the city’s current noise ordinance, which is formally called the Sound Control Ordinance. He said the Council had based the rewrite on abundant feedback received from nearby residents.

While local musicians and bar/restaurant owners asked the Council not to make any decisions that would affect their ability to make a living, frustrated residents conveyed their displeasure with trying to deal with the noise levels during what they felt should be quiet times.

The noise ordinance rewrite included, among other items, a new “plainly audible” clause, which would allow for a police officer to judge with his own ears which establishment was in violation of the noise ordinance. Penalties for violations of the ordinance would also be more harsh.

City Commissioners suggested to Fournier that the codes should be adjusted for land use and zoning, and should take into account extenuating circumstances. After the public hearing in the Fall, the ordinance will be finalized.

Plans are about 60% completed for the construction of two 10th Street roundabouts in downtown Sarasota. The FDOT is scheduled to begin work on the $7.1 million project in April of 2017,  but will hold a public hearing on Tuesday, July 8th at 5 p.m. at the Van Wezel Performing Arts Hall.

At that time, citizens will have the opportunity to review and ask questions about the plans, and all associated documents. The FDOT has attempted to address possible issues with the building of the roundabouts, like allowing entrance to Centennial Park during the construction, as well as halting work during the annual Suncoast Offshore Grand Prix Festival.

A group led by Sarasota County Board of Directors chairman Michael Klauber is heading up an effort to develop a vision for the future of the Sarasota bayfront and the land surrounding the Van Wezel Performing Arts Center.

The group, which also includes members from the Van Wezel Foundation, the Sarasota Orchestra and the Greater Sarasota Chamber of Commerce, has held around 25 meetings with neighborhood and community representatives since March. With a mission of establishing a cultural and economic legacy for the bayfront, Sarasota Bayfront 20:20 also hopes to ensure continued public access to the area.

Though the project is still in the early planning stages, support from the 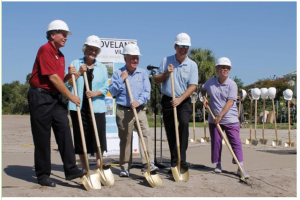 City Commission will eventually be required, in order to get a commitment of public funds to help develop infrastructure. In the meantime, the group will continue to garner public support by going out into the community and clearly defining its goals to neighbors.

The Loveland Village groundbreaking took place mid-June. More than one hundred community members joined Loveland students, staff, board members, and local community leaders in celebrating the next phase of ‘Building A Home Where The Heart Is’.

For more information on the Village and ways you can help make it a reality, please contact us at 941-493-0016 or visit www.lovelandvillage.org

“Thank you to everyone who was able to join us in this celebration! What made the event so special was that it brought together so many people who are still actively working together to make the dream of a Loveland Village a reality”, said Aimee Holmes, Chief Development Officer at Loveland Center, Inc.  In addition, she wanted to share  a  special thank you to the following businesses:

To see more pictures of the Groundbreaking Ceremony, click here