Who will buy the Bank of America building on South Siesta Key? 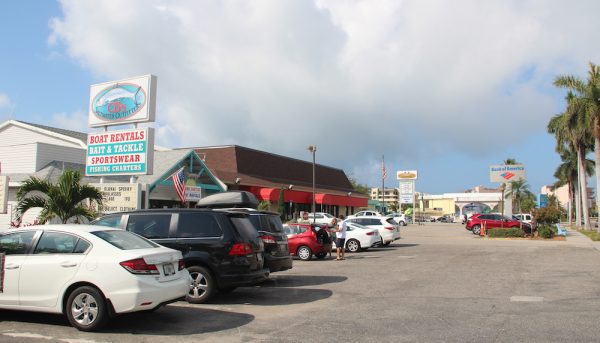 With the Bank of America branch on Stickney Point Road having closed on Oct. 16, Siesta Sand has learned that the rumor mill already is in full swing, speculating on what will happen to the property.

First, in regard to the bank, Matthew Daily, a Bank of America spokesman based in Atlanta, reported in a telephone interview that notifications went out to customers in early July, letting them know the closing was coming.

“We’re always looking at our network to try to make sure it fits our clients’ needs and habits,” he explained. With more and more people opting to handle regular transactions online or via a mobile app, he said, far fewer customers come to a branch these days to cash a check, for example.

“We find that the branches are increasingly being used for more substantial things,” Daily continued, such as retirement planning, small business assistance and loan applications. Therefore, he said, actual branches will remain a part of the bank’s operations.

A graphic Daily provided Siesta Sand showed that in the third quarter of this year, Bank of America recorded 1.4 billion mobile log-ins, an increase of 17% year-over-year, and 137 million bill payments online. Additionally, 77% of total deposits were made via a mobile device or ATM.

As for the future of the property on Stickney Point Road: Daily said that whenever the bank closes a branch on a parcel it owns, the bank typically markets the property for sale. A third party handles those transactions, he added, noting that he had no information about Bank of America’s specific plans for the Stickney Road site.

The Sarasota County Property Appraiser’s Office records show that the parcel comprises 25,350 square feet; the building was constructed in 1974. This year, the market value of the land was put at $860,100. The total taxable value of the property is $1,538,400. The zoning is Commercial Intensive.

People familiar with the site know that it sits between two storefronts owned by CB’s Saltwater Outfitters, with a Daiquiri Deck restaurant built over the smaller one of those, to the west.

In fact, that smaller one used to be a BP station. After it was closed, the Tush family that owns CB’s bought the property, concluding the transaction in June 2011. Early on, Mason Tush — whose parents, Aledia and Lee, bought CB’s in 1976 — was considering whether to open another gas station there, as none existed on the south end of the Key.

Later, the family transformed the building into a second shop.

Just to the south of the Bank of America property, on Old Stickney Point Road, is the site of the former Fandango Café, which is owned by Dr. Gary Kompothecras, known widely for his 1-800-ASK-GARY medical and referral service. The deteriorated café structure is adjacent to a storage business Kompothecras also owns, and that is next to Clayton’s Siesta Grille.

In April, Clayton Thompson, owner of the restaurant, appeared before the County Commission to argue for a change in the Siesta Key Overlay District zoning code, so Kompothecras would have more flexibility to construct a boutique hotel on the sites of the former Fandango’s and the storage business.

Commission Chair Nancy Detert asked Thompson whether he would be willing to sell his restaurant to Kompothecras, to be torn down, if Kompothecras let him operate a restaurant within the hotel — if the hotel ultimately becomes a reality.

Detert suggested that combining three parcels would give Kompothecras a lot more room to construct the hotel.

“That clearly is an option,” Thomson responded about a potential sale, but it was not his desire, he added. Then he turned to Kompothecras in the audience and joked, “Gary, if you’ve got a really big check … come talk to me after the meeting.”