If you enjoy live music and feel a little adventurous, you can get a lot of entertainment at one of Siesta Key’s weekly open mic nights.

The wide range of talent that runs the gamut from cheering someone who has the guts to even get up there, to that rare treat when someone truly brilliant blows you away with mastery that leaves you thinking they must have come from somewhere else…at least that’s how I felt the first time I heard James Albritton, at an open mic, fronting a one-off band, shredding solos on his blue fender strat and owning the high notes of “You Shook Me All Night Long” in such a way that would likely make even Brian Johnson proud. 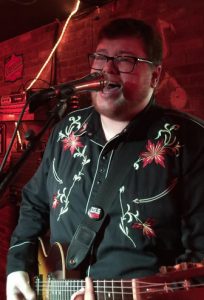 As it turns out, James lives right here, and can be heard weekly, showcasing an immense catalogue of covers perfected in his signature style of powerful vocals and fluent guitar skills.

James: I was born and raised in Venice, FL and I still make Sarasota County my home.

James: I started with drums when I was 12. I work in a music store, so I can play a number of instruments fairly well, like bass, drums and a little ukulele…I can trick people into thinking I can play banjo, but I’m primarily a guitar player and singer…I didn’t actually start singing out until I was 22.

WPT: When did you first start playing live?

James: 3 weeks after I turned 21. I was working at a music store, and this guy picked me up to be his drummer for a piano drum duo, doing Ray Charles stuff and we spent one of the sets walking around playing dobros.

It turned into my first solo gig when the other guy couldn’t make it one night and the owner, who knew me, told me to go get my guitar and play by myself. I didn’t have nearly enough material that night, but he said I could come back the following week if I had enough material, so I went home and learned like 40 songs in a week!

WPT: Do you primarily play solo or bands gigs?

James: I’ve always done both. I prefer to collaborate, but I still do solo gigs.

WPT: Where do you primarily play?

James: My current residency gig is with my band, Hydramatic, at the Gator Club, every Monday night 9:30pm-12:30am on Main St. in Downtown Sarasota, across the street from Mattison’s City Grille.

WPT: Where did the name Hydramatic come from?

James: I have a 1963 Pontiac Catalina 4-door. The Hydramatic, with that spelling was the name of the 3-speed transmission that Pontiac tried for 2 years that wasn’t a big success for them, so they changed the design and renamed it the “Hydromatic”, which they still use today.

Anyway, I liked the name a lot and it wasn’t taken by anyone. We have TheHydramatic.com, we have it for Instagram, Facebook it was such a short-lived product that no one else ever used it.

James: Very soon, our IT guy is on it.

WPT: How did Hydramatic come to play the Gator Club?

James: About 2 ½ years ago, a buddy of mine, Jake Heady brought us in on his original band project. It started as a 7-piece, practicing at my house, but Jake moved back up north and the money wasn’t enough to justify the other 2 guys driving down from St. Pete, so it dropped down to the 4 of us, who make up the band now.

I was playing solo at the time on Mondays, but not really feeling it, so I invited the band to come play and split my solo pay. They came down, some of them from Tampa, for what was essentially just gas money and it was a true collaboration. Everyone had a say about which songs to do and how we worked out arrangements. We came up with our own approach to songs together and it really blew up pretty quick into a happening night…people started coming to hear the band and the club bumped us up to band pay.

WPT: What band members do you have?

WPT: What different genres do you play?

James: We play a wide variety of genres from different decades, but come at them from a soul, R&B lens, and ask the question, “If Wilson Pickett fronted Led Zeppelin; what would that sound like?”

WPT: What can people expect when they go see you play?

James: We play for ourselves as much as the audience. The audience can tell if a band is bored and phoning it in up there, so we just have a good time, jam off each other and really connect with the audience.

James: All of them really…we get the Mattison’s jazz patrons after the rush but we’re drawing equally from the Ringling/New College crowd. It’s a cross-section of intergenerational mingling all jiving to the same music; it’s kind of cool.

WPT: What’s next up for Hydramatic?

James: We’re touring around the country and working on an album with Kim Logan. She’s a singer, songwriter and performer working around Nashville, Boston and New York, recording her next album under the name, Kim Logan and The Hydramatic. We do our own thing, but we also back up someone else. We’ve done it two or three times now.

WPT: What makes Hydramatic such a draw to work as a back-up band?

James: We are truly a unit. We have our own sound and the same members have been playing together for two years now. We only book gigs under our name if everyone can make the gig. We never use subs, and are consistent so people who hire us as a band or to back them up are guaranteed to get our signature sound.

James: I play every week with Hydramatic and I’m on call to play with other bands around Sarasota County. I work at Troll music 40 hours a week and rehearse with my band, and we’re getting set to head back on tour. I truly enjoy everything I’m doing.

People comment that I could play full-time, which is true, but I have a lot of practical experience that goes to work with me at the music store everyday. I get to share that every time a fellow musician is looking to shape their sound in a different way or when a child comes in to buy their first instrument. I wouldn’t trade any of it…who else would be there?

1666 Hillview – A Piece of Sarasota History