The April 2013 edition of the Siesta Sand Newspaper launched the “Who’s Playing Tonight” article and featured singer, songwriter; Ben Hammond.In that time I’ve had the privilege of interviewing, and getting to know dozens of local area musicians and their music. Don’t tell anyone you saw a songwriter use a cliché, but seriously, it doesn’t seem like that long!Thankfully, there’s no shortage of Siesta Key artists to interview, but I like to step a bit outside the format each February to kick off the season. This time I followed up with Ben Hammond, now living in Denver, Colorado…

WPT: I guess the first question is; how did you wind up in Denver?

Ben: Every year, especially during the summer when tourism drops off in Florida, I travel. I thought it might be fun to try something different for a change and since I grew up in Maine, where there are different seasons, mountains and skiing, Colorado, which also has a vibrant music scene, seemed like a good place to go.

WPT: When did you move there?

Ben: We arrived in June of last year, after traveling across South East Asia for about 9 months.

Ben: It was a great experience; we backpacked, hitchhiked and rode busses…we stayed in hostels and visited friends. We saw Bali, Nepal, Cambodia, Laos, Myanmar, Thailand, and Vietnam. I brought my guitar, so I got to play some gigs along the way.

WPT: How well are you acclimating to gigs in Colorado?

Ben: I’m doing pretty well. I’ve been playing a lot, usually within an hour or two of Denver. I’ve been booking gigs mainly in the ski resort areas like Vail and Breckenridge. It’s a party every single night, because there are tons of people staying in the condos, during ski season and it’s busy all year around because they go hiking in the summertime.

The main difference between here and Siesta Key is that Denver venues don’t book weekly, they book “one-offs” and if they really like you, they have you back monthly.

WPT: How often do you get back to the Siesta Key area?

Ben: I have a solid base in Florida, with family and some strong professional connections, so I come back throughout the year for “working vacations”, and play private parties, house concerts and weddings.

I’ve been playing a lot with John Patti (Who’s Playing Tonight – August 2015). We played a couple of shows at Margaritaville in Hollywood, Florida, with Nadirah Shakoor, who’s been singing in Jimmy Buffett’s “Coral Reefers” band for years. She’s absolutely phenomenal. John played steel pan and percussion and I played guitar and bass.

WPT: How did that project come about?

Ben: Matt and I have been friends for a while. He plays solo as well as with a band, writes and records. He would get me up to sing harmonies or play guitar when he was playing at The Beach Club and the old Speakeasy on the island. It was pretty instrumental in me getting into the scene and led to my first gigs on Siesta Key. Over the years, we wound up playing in bands together and he would drop in at SKOB, when I was hosting the open mic night.

That’s probably where I first heard the song. It’s called, “Gone”. I loved the song and started covering it, because it fit so well with everything else I was doing…people started requesting me to play it. It also wound up on being a regular part of the set list when John Patti and I played together, because it worked really well with the steel pans.

The recording session came about as a result of a couple people I met playing a breast cancer research fundraiser hosted by Peter Gatti of the Tampa based internet radio station Rock it Man Radio. I was given some recording time at their recording facility, Studio G as a thank you. I’d already recorded all of my own originals to date, so John and I used the opportunity to record “Gone.”

Matt had recorded it with a full band, but we did a stripped down version, with acoustic guitar, steel pan, hand-percussion and upright bass.

WPT: What are your plans for the release?

Ben: We’re going to shoot a video. We’ve got Joey Durango lined up to direct and shoot it for us in March. We’re pretty excited to be working with him again. His credits include working with one of the first groups to gain popularity on YouTube; Boyce Avenue. They are a Gulf Coast based trio who became known for doing acoustic covers and have grown to over 9 million subscribers, regularly getting 10’s of millions of views of their videos. They’re internationally known and they tour the world playing stadium shows, but stay pretty well under the radar locally. Their popularity has also enabled them to afford better equipment and production, and Joey Durango is one of the filmmakers they use on their videos.

WPT: How did you meet them?

Ben: They’ve started working with other artists. One of the group members, Fabian Manzano, owns a design studio in Gulf Gate, called “These Quiet Sounds”. He brings unknown artists into the shop to shoot a live set, usually one cover and one original song, which he edits and posts on his page to showcase them to their huge audience. It’s just super generous and that’s how we met Joey Durango, too. He shot our cover of Bruno Mars – Uptown Funk, for a “Live at the Shop” video.

WPT: It’s great to see that you’re managing to keep yourself plugged into the Siesta Key area while expanding across the country.

Ben: It really all comes down to the people who enjoy music. They come out to hear you play, looking for you to provide them with entertainment, but it’s been my experience that when a connection is made, they also care about you and like to participate in growing your career…that’s really what makes it possible and worth it.

WPT: Where can people go to hear Gone?

Ben: We’re going to start off with a digital release and time it with the release of the video, but readers can go to my website and get a free download, if they want to hear it first. For more info about Ben Hammond and to be the first to hear, “Gone”, log onto benhammondmusic.com. 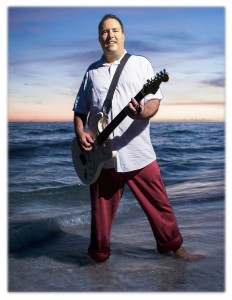 Mike Sales is a local singer/songwriter. For more info log onto mikesalessings.com