An interview with RPM’s Mark Waelti
By Mike Sales 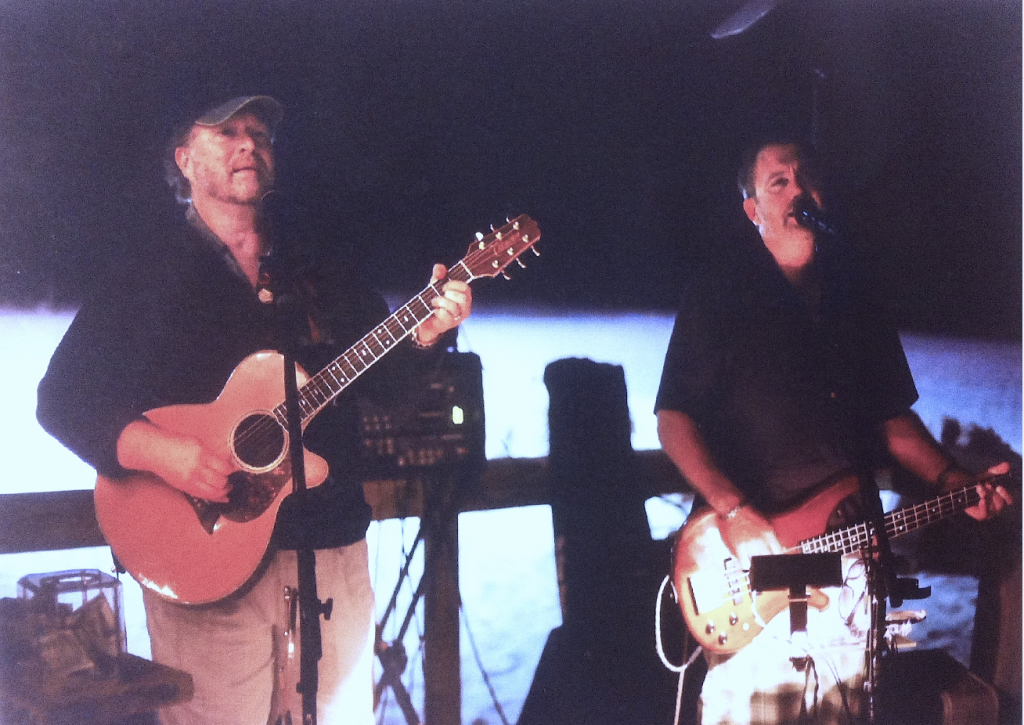 Prior to ever hearing them play a note RPM (Randy Marsh on guitar & vocal and Mark Waelti on bass & vocals) commanded my respect by virtue of the premier venues.

I went to hear them in prep for this article at Captain Curt’s Sniki Tiki. That was the first time, but it won’t be the last!

I recently spoke with Mark about the duo, before he had to get ready for his show that night…

Mark: I was born in Rockford Illinois 1961 and moved here when I was 8 years old.

WPT: When did you start playing bass?

Mark: I started playing bass when I was about 16 years old. I played drums, trumpet and different instruments before that.

WPT: When did you start playing live?

Mark: I played with the Riverview High School Entertainers choir and joined the Kelty Band. At 17, I started playing out with a disco band and a rock & roll band.

WPT: How did RPM come to be?

Mark: I met Randy in 1980 at the Sawmill Inn, which was a popular local restaurant at the time. We formed RPM shortly after, in 1986.

WPT: How far out do you play?

Mark: Throughout the Gulf Coast, the Keys and several places around the country.

WPT: When did you first start playing on Siesta Key?

Mark: Randy and I started playing together about 30 years ago and have probably been playing on Siesta Key for 25 of them…at Gilligan’s for 15 years, but it was called the Keyhole before that.

WPT: What is your schedule on Siesta Key?

Mark: We play at Captain Curt’s on Monday and play Tuesday & Thursday at Gilligan’s. All performances are 6-10pm.

WPT: What did Siesta Key Village look like 25 years ago?

Mark: I could go back further than that, I grew up on Siesta Key when I was in Jr. High and High School…there was the Beach Club and the Crescent Club, the Siesta Market and a few little shops here and there. It was nothing like it is today.

WPT: You have a long track record; to what would you attribute it?

Mark: Talent is a factor, Randy is an incredible guitar player, as are the songs we choose to play…songs that have touched people’s lives and that a lot of performers don’t play. For instance, we’ll play “Taxi” by Harry Chapin, just to name one. We focus on playing and singing well. I also believe our harmonies make us stand out, because we take great care in arranging each song.

Simply put, it’s our living. We have to go to work every night and treat it like it matters, because it does. We show up on time, respect the venue operators and give the people what they want.

WPT:  Besides playing onstage, how many hours per week would you say you work overall in support of your career?

Mark: Driving to the gig, setting up, tearing down and driving back, can easily add 2 hours per night…we frequently work out of town. Randy has the van, to haul the gear and he maintains the equipment, while I handle all of the marketing; I book the band, post our gigs online and some weeks we can spend an additional 10 hours sending emails and going to meetings. It’s easily a fulltime job playing 6 days a week.

WPT: How would you describe what people can expect at your shows?

Mark: Our business card slogan used to read, “The music you forgot you loved”. People 50 to 75 years old, are going to hear music they grew up on…songs that missed the top 40 but were really enjoyed back then. We play easy-listening stuff, James Taylor, Simon and Garfunkel, a lot of Jimmy Buffett, obviously so you’re gonna get the island sound, but we also do Old Country…Willie Nelson, Merle Haggard, Johnny Cash, Glen Campbell…and some new Country…Zac Brown and stuff like that. We mix it up, but we pick and choose and play what we enjoy and can play well.

WPT: Do you play originals?

Mark: I’ve written some stuff and so has Randy and we’ll play originals upon request once in a while, but let’s face it; people are here on vacation…they’re from the Midwest or up East and have 2 weeks each year to come down, hang out at the beach and they want to hear Jimmy Buffett and other island styles…even the locals… we don’t begrudge them wanting to hear the same songs every night, if that’s what they want to hear because the customers are paying the bills.

WPT: What’s your favorite part of being a professional musician?

Mark: Playing golf during the day (laughs). Honestly, these days, we get some of the perks like spending time with our kids or occasionally sleeping in, but we really just enjoy playing music. We love playing for people on vacation or putting people in a good mood after a bad day…it makes us feel good.

WPT: It sounds like you’re enjoying everything you do; what can we look forward to from RPM?

Mark: We play with a full band a few times per month, which is a lot of fun. We’re also planning our 30th Anniversary concert coming up in 2016 which will take 6-8 months to put it together with the tickets and the VIP area and the venue which will likely be the Venice Theater. It’s important to us to keep things fresh. We’re so fortunate to get to work all of the time and we have a great following. We appreciate people coming back time after time to hear us; I guess its kinda like watching your favorite show over and over…you want to go back and see it again.

WPT: Do you have CDs available at your shows?

Mark: We have 4 CDs available at the shows and hope to have our 5th CD ready for the anniversary concert.