An interview with Nicolaas Kraster
By Mike Sales 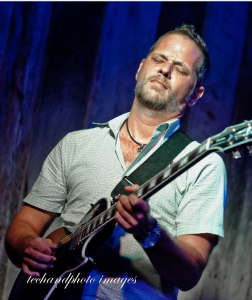 I conducted this interview with Nicolaas Kraster, co-founder of “Ari & the Alibis” and one of the areas most talented guitar players, last May, at the same time I interviewed Ari for “Who’s Playing Tonight” – Siesta Sand June 2014.

I hope you enjoy what Nic had to say…

Nicolaas: Fredonia, NY…it’s a small town in between Buffalo, NY and Eerie, Pennsylvania.

WPT: When did you start playing guitar and writing songs?

Nicolaas: When I was 16, I realized that writing stuff was easier than learning it. From the beginning, it was all about artistic expression.

Nicolaas: I was in bands in high school. We’d compete in “battle of the bands” competitions and play at parties but not for pay.

WPT: What kind of music did you play?

Nicolaas: Pearl Jam, other songs from that era and some older stuff…basically, easy/cool guitar music.

WPT: And when did you start playing professionally?

WPT: I remember calling you about a gig referral for Latin music once, to which you responded with a suggestion that I call a Latin band…you were polite about it but I felt a little dumb from ignorance, so will you describe the kind of music you play?

WPT: In addition to the style in which you write and perform for your band, I’ve seen you play open mic’s and jams in rock and blues styles and was very impressed by your versatility.

Nicolaas: That was very new to me until I came to Sarasota and began hanging out and jamming with Thorson Moore and Scott Gibson, who could play every style…bluegrass, country, blues, rock, reggae, jam-band stuff, jazz…everything!

So I basically compared my skill-set with these guys who were tearing it up in every genre and realized, “alright, I guess that’s how you do it here”, and they began to show me stuff. It was a great learning tool to watch them play. I’d watch their hands and then duplicate the riffs. In fact, when Scott would notice me “digging” on a certain technique he’d often repeat it at half speed, so I could see what he did. He’d never take any credit for it, but that’s how he taught me. Sadly, he passed away a few years back, but he was a great guy and a monster…monster guitar player.

WPT: When did you come to Sarasota?

Nicolaas: I came here in 1994 to attend Ringling School of Art & Design as an illustration major.

WPT: When did you start your first band here?

Nicolaas: After I’d been in town about 4 or 5 years, I met a violin player named Kevin. We went to Costa Rica for about 6 months to put our show together, then came back here and assembled the whole band called “Lotus Fire.” It took off. We played all around town for a few years, toured Europe, came back and then attended a big music expo where label representatives were. They charged $500.00 to get in and perform, but everyone there just shot us down.

WPT: What town was it in?

Nicolaas: It was in Miami. We kept hearing that they didn’t know what to do with a bunch of white guys playing Flamenco and that the gigs we already had were more than they could get us…they said there was no reason for us to sign with them. That actually broke my heart to the point where I stopped playing for a year and a half.

WPT: So how did you get back into it?

Nicolaas: Well, after a self-destructive stint in Buffalo, I came back here, cleaned myself up and started playing solo. I then put together a band called “Los Listo”, which evolved into a band called “Cabal”, which was the first project that involved Ari. We then got rid of our bass player and hired back the original violin player and changed the name back to “Lotus Fire”, so we’d have the resume.

WPT: So now, you’re “Ari and the Alibis”…and you’re cd has been released?

Nicolaas: The “Ari & the Alibis” EP was released this year.

Nicolaas: There is a lot of “Lotus Fire” influence, with the Gypsy Swing, but instead of Gypsy Swing and Flamenco, its Gypsy Swing and funk…and then there’s blues and rock. We haven’t moved completely away from world music, but its definitely more jazz and blues oriented.

WPT: So your audience can expect a variety…

Nicolaas: When I go see a show, I expect to see variety, because if I hear the same thing for 3 hours, I’ll get bored out of my mind. So, I like to take the audience on a roller coaster ride. It’s not so much about trying to please everybody as much as keeping it interesting to play.

Nicolaas: We’d like to play all of the big jazz festivals and get out on some great stages where people enjoy improvisational music. We actually have some inroads to that goal, due to some tremendous help from Tony Tyler and Dani Jaye of “Come Back Alice.”

WPT: What’s your favorite thing about being a professional music?

Nicolaas: The moments when I’m given the opportunity to play a high profile gig like at the “Main Sail Art Festival” or “Skippers” when I’m put in front of a large audience and deliver.

For more information about Nic and Ari visit http://www.nicandari.com/

You can also find Ari and the Alibis on Facebook at https://www.facebook.com/ariandthealibis