An interview with Russell Donnellon 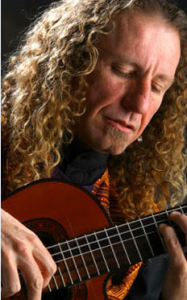 The phrase “I’m a solo guitar instrumentalist”, is unlikely to convey the hours upon hours of practice and development over years of dedication to an instrument and a way of life that just 10 seconds of listening can do in an instant.

Mastery has the power to truly amaze and you can find such a treasure every week on Siesta Key at The Cottage…his name is Russell D.

Russell: I started playing when I was 9, with my brother, who was 19 at the time. We sang Beatles songs together and worked out harmonies and I played in rock and roll bands for a couple of years.

WPT: Did you have lessons?

Russell: I’m self-taught. When I turned 13, I joined a Gospel band and played with them for most of my teenage years. I learned a lot by playing with them because most of the other players were 10-20 years older than me and all very good musicians.

WPT: When did you start playing professionally?

Russell: I first started getting paid in New York, where it’s a great honor just to play, even for free (laughs), so when I did get paid there it was just enough to cover expenses.

When I was 24, I moved to (San Francisco) California where I fell into playing solo, waiting for a bass player to show up. I’d played in ensembles all my life, but didn’t know enough people out there to get anything going.

WPT: How did you go about making the transition?

Russell: My goal was to create a complete musical structure, but could never quite do it with just a guitar, until I picked up finger style and learned how to play counterpoint. I brought that style to the pop, r&b, gospel, jazz and Brazilian music, without a rhythm section, at places where I played.

WPT: How long did you stay in San Francisco?

Russell: I developed a solo style and took it on the road, after a few years to play festivals across the country. I wound up doing that for about 30 years…traveling 1000 miles a week, ping-ponging around the states, with a couple of people I employed to drive, roadie and sell my cds while I performed on the festival circuit.

Russell: I did really well. I’d work 8 months out of the year, then practice, write and make records and travel for 4 months. I’d make a new record every 3 years and visit different countries every 3 years to get a taste of other places.

WPT: What states did you play?

WPT: How did you wind up here full time?

Russell: In about 2003, the music medium changed so drastically with the popularity of downloading. People just didn’t buy cds enough to support that lifestyle anymore…So, I went to Spain and made a guitar and learned a lot, then I went to Cuba and studied Cuban music, but eventually I had to figure something else to do for work.

Of the four hubs; New York, San Francisco, Detroit and here, I chose Siesta Key. I’ve been here for 5 years and I love it…I’m done with the road…for now.

WPT: Have you ever had a job other than music?

Russell: In my 20’s, I did quite a few jobs, each for a week…I was a plumber’s helper, a hot tar roofer, a hamburger flipper…I decided early on that I’d rather starve as a musician than tolerate anything I couldn’t enjoy.

WPT: What can people expect to hear when they come to see you play?

Russell: I am a solo, improvisationalist, instrumentalist. I play a style that recreates the entire landscape of the tune without the addition of tracks, loop-effects, harmonizers or vocals.

WPT: What style do you play?

Russell: I play familiar hit songs, with melody lines everyone will recognize and while I make sure to give them enough of the music to hold onto as something they know; for me, improvisation is the thing, so, even though everything I do is well plotted out, arranged and carefully rehearsed, each song takes its own course, every time I play. I’m well prepared, with many different vantage points of looking at the song, but never know exactly which way I’ll play…it keeps it interesting to me and I feel, makes it interesting for the audience to hear.

WPT: What genres do you play?

Russell: I pretty much do everything…Pop, R&B, Samba, Salsa, Flamenco, Reggae, all played from a Jazz perspective, using a Classical technique, which allows me the counterpoint of 2 or 3 parts at once. It represents the entire song; much like you’d hear someone play a piano.

WPT: You mentioned that you perform without any accompaniment; why?

Russell: Although people are very accustomed to a heavily produced sound, with 100 tracks, a wide range of pitch and fidelity and modern technology has availed solo performers with the means to emulate that with looper effects, backing tracks and harmonizers; I find every added element that is repetitious and exact, controlled by machines, can’t breathe or move with what I’m doing…it is just too mechanical. At that point I lose the essence of subtle variation, which is so central to what I love most about performing live music. It’s just my personal thing, but it feels like I’m stuck in a mold, so I prefer to take the same approach to music that musicians did 500 years ago, when every note, played anywhere in the world was played live.

Russell: It’s a challenge to work in a town where most performers sing, but I provide an alternative for people who may be in the mood to hear songs they recognize, but without vocals for a change.

There’s something beyond the story line of a song. Many lyrics share basic subject themes and to me, often sound more like similar works of poetry, but what really makes a song unique is how the lyrics meet the music. I study the lyrics over and over to make sure I understand the story and then tell that story with my guitar.

WPT: Where can people come to hear you play on Siesta Key?

Russell: I play at the Cottage every Friday and Sunday night 6-10pm.

To find out more about Russell D, visit http://russelldonnellon.com/

The Cottage is located at 153 Avenida Messina, Sarasota FL