…an interview with James “Sunny Jim” White
by Mike Sales 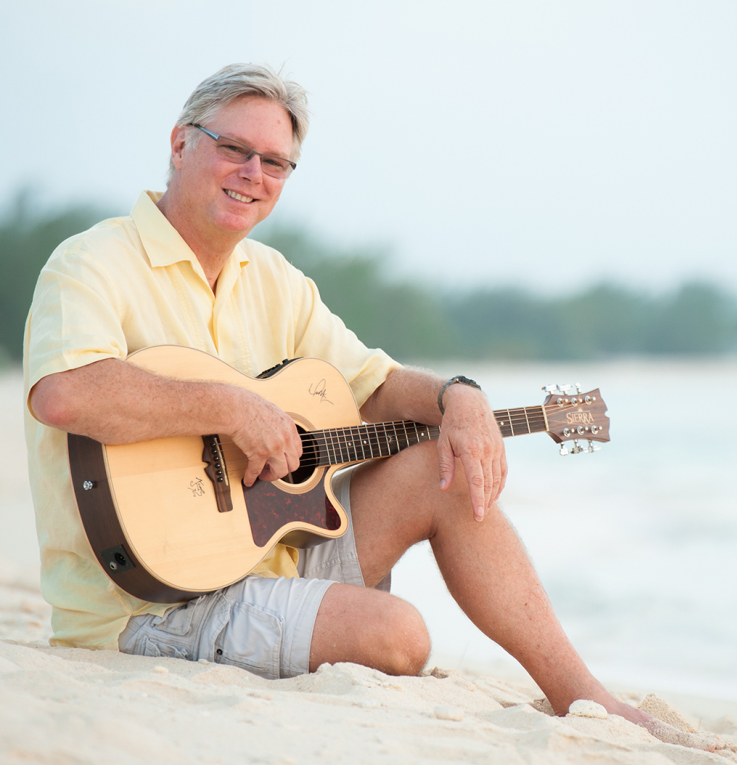 One of the perks of writing this article, other than getting to know artists I may not otherwise meet, is the opportunity to interview musicians who are further along in their careers than I am and get a first-hand glance of what their stage of the game looks like.

Along those lines, interviewing Sunny Jim was inspiring. Jim is an award winning singer songwriter, with scores of original recordings to his credit, long-standing house gigs on the island, a regular tour schedule and a national following.

As I was leaving the interview with 20 minutes of questions and answers recorded on my phone, Jim popped the trunk and gave me four CDs, which I listened to before writing.

With his unique, yet genre-loyal sound and writing style, excellent production and witty, sometimes touching subject matter; it’s no wonder things are going so well for Sunny Jim.

Sunny Jim: I’m originally from San Antonio, Texas. My dad worked for Gulf Oil, and when I was 10, we moved to Corpus Christi for two years. That was pivotal for me because, just as I was nearing my teenage years and becoming aware of the world, I discovered the beach, out on Padre Island. We moved to Bakersfield California for my Junior High School and High School years, and I went to college in Chico, California and remained for another 6 years after that, playing music.

WPT: When did you start playing music and writing songs?

Sunny Jim: I started writing music about the same time I learned to play guitar around age 12. Right off the bat, I realized that writing your own music was pretty much the only way to differentiate yourself.

WPT: Did you ever have a job other than music?

Sunny Jim: I had a job processing Medicare Claims after college, for 3 years until I paid off my truck and sound system. I have been playing music for a living ever since.

WPT: How did you get to Siesta Key?

Sunny Jim: From Northern California, where I had a small band and worked as a solo and duo act, I moved, with my band to Nashville where I focused on my songwriting career.

It felt like graduate school to go and hear the great songwriters there. I used to work at the Bluebird Café, a premier songwriting spot in Nashville. I’d hear amazing songwriters…Don Schlitz, who wrote “The Gambler”, among dozens of number one hits, John Prine, and all of the great songwriters from the 80’s. It was like sitting in on a master class…really inspiring for a young songwriter like me.

From Nashville I joined a 50’s-60’s show band, the Marvells, traveling the East Coast. The band booked work on a cruise ship in the Caribbean…one step closer to the beach for me.

While onboard, the Jamaican band hired to play afternoon shows, jumped ship in Jamaica and the cruise director needed someone to fill in. Since I was the only band member with solo experience, I took the spot. They could only pay me with a bar tab, so for the next 3 weeks, I was literally playing for drinks. They also asked me to come up with a Caribbean name to use in the promo flyer for the passengers, so I used a nickname I’d picked up in Nashville.  Because of my sunny disposition and because he was a huge “Hard Days Night” fan, a drummer friend called me Sunny Jim. Once the band heard it, they started calling me Sunny Jim. About a year later, the band booked a yearlong stint at the Treasure Island Resort in Grand Cayman, and soon everyone on the island got to know me as Sunny Jim, so the name just stuck.

I stayed in the Cayman Islands for 12 years. When the band left, contract fulfilled, I was hired as the entertainer-in-residence at the Hyatt Regency Grand Cayman, one of the best resorts in the Caribbean. What a great gig!  I met my wife Adela in Cayman. We got married on the island and had twin daughters in 1992.

I wrote and sang a song for the 1993 movie “The Firm.” That’s me performing at the pool bar scene in which Jeanne Tripplehorn drugs Gene Hackman’s drink.

In 1996, I met Jimmy Buffett while he was flying his seaplane around the Caribbean for his 50th birthday trip. We wound up giving Jimmy a ride to the Hyatt where he was staying, and babysat Cameron, his little boy. He mentioned us in his book “A Pirate Looks at Fifty” and Parrot Heads doors began to open. In 2001 we moved to the Siesta Key area and enrolled our daughters at Pine View School, one of the best schools in Sarasota County, and Florida.

WPT: So now you live in the Siesta Key area and tour. How did that come about?

Sunny Jim: Jimmy Buffett’s Radio Margaritaville came to Grand Cayman in 1999 to do a live broadcast of my show on Seven Mile Beach and that gave me exposure to Parrot Heads all over the country. I started getting booking requests while still living in Cayman. We heard about Sarasota from a local fan so we checked it out and fell in love with the area.

WPT: How many original songs have you recorded?

Sunny Jim: I have published 11 CDs of my own music…a friend recently counted 138 original songs that I have recorded. I am now releasing a compilation of live recordings with singer/songwriter friends who come through town while touring Florida.

WPT: What can people expect to hear at your gig?

Sunny Jim: I play tropical style songs, mostly originals, and a few mid-career Jimmy Buffett songs, along with a few other popular covers. I play with backing tracks that I record because I also play the pan (steel drum) along with the guitar… mostly up-tempo stuff. When I’m doing songwriter shows, it’s just me with the guitar.

Sunny Jim: I’ve felt very fortunate to have been able to do what I love and raise a family at the same time. I know a lot of musicians, who struggle with that.

My favorite thing is connecting with people, for example; this morning I got an email from a friend up in the Chicago area, about a mutual friend who had a relapse of cancer. She asked me if I would send our friend a note to cheer her up a little bit. Having somebody say something like that means a lot to me, because these are people with whom I’ve been acquainted for maybe ten years and have played a part in adding joy to their lives…that’s why I like doing this, and because I probably wouldn’t be good at anything else (laughs).

This year, Sunny Jim is nominated for CD of the Year, Song of the Year, Entertainer of the Year and Best Male Vocalist at the upcoming Trop Rock Awards scheduled November 4th in Key West.

He has won 14 Trop Rock awards including “Album of the Year” in 2011 at the annual ceremony held in Key West, in conjunction with the Parrot Head “Meeting of the Minds.”

You can find him at www.sunnyjim.com for more info.

Sniki Tiki features live music every night and is located at:

Mike Sales is a local singer/songwriter for more info log onto mikesalessings.com