An interview with Ted Stevens

The first time I saw Ted Stevens was at the Drift Inn on Anna Maria Island, where every local musician winds up playing, but I instantly recognized the polish, with which Ted stood out from the crowd. 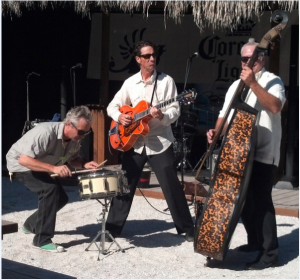 WPT: Were you a guitar player or singer first?

WPT: When did you start playing?

Ted: When I was 18…after graduating high school.

WPT: When did you start gigging?

Ted: I’d wanted to come to Florida for the fishing, the water and the lifestyle for as long as I can remember. I’d heard about Sarasota from a friend, so when the scene I was playing in Las Vegas started to dry up, I took the opportunity to move here.

WPT: How did you get to Las Vegas?

Ted: I toured, through a management company, as the bandleader of the backing bands for “The Drifters”, The Platters”, “The Marvelettes”, “Percy Sledge” and other Motown and Doo Wop acts from that era. We toured the East Coast, from Maine all the way down to DC, until they started booking theater shows in Vegas for extended amounts of time and asked me to come out there. I wound up doing that full time for nearly 15 years…the last 6 being in Las Vegas.

WPT: And how long have you been here?

WPT: How long did it take you to get established professionally on the Gulf Coast?

Ted: During the first year, I checked out the scene, networked and played part time, but was playing fulltime by the second year.

WPT: I’d imagine your experience made it pretty easy to get up and running here?

Ted: The scene here, with its demographic, was actually more receptive to my kind of music than where I came from. Certain enthusiast kids kept the roots rock alive there, but around here, I found people had a connection to the music from when it was new. It was a refreshing surprise.

WPT: How often do you currently play?

WPT: Where all do you play?

Ted: We play weekly gigs and festivals in Anna Maria, Siesta, Punta Gorda, you know, this region…within an hour of here. We also head out to Ocala & Leesburg and do some bike festivals.

Ted: Yes, and I play some solo gigs, like “LeBarge Tropical Cruises” every week.

Ted: I like to play lots of different styles, but am at my best playing and singing rockabilly, roots rock and old school rock & roll, as well as originals that go into every show.

WPT: What can people expect when they come to a show?

Ted: Dance music; high energy with lots of crowd banter and a good visual show from a band that dresses up. The bass player plays an upright bass. We go out into the crowd and dance with the girls and the drummer is really entertaining as well…swing, rockabilly and we try to get everybody involved.

WPT: I must say that you and your band put on very high caliber show; how much of what you do is rehearsed?

Ted: We develop our act by adding things as we go. I learned a lot from working with acts like “The Temptations”, where they have everything choreographed and every element planned, right down to their shoes. It becomes a clear-cut choice between being professional and being…whatever.

Ted: We have 2 cd’s out and a third currently in production and due out this winter.

Ted: I like the freedom. I like getting to make my own schedule and play when, where and what I want. I appreciate the privilege to choose what I get out of it, based on what I’m willing to put in.

Ted: I’m happy with what I’m doing. I was recently offered a job as a tribute act, but I really have no desire to go back on the road. I’d like to keep writing, release a cd every 2 years, play solo & band gigs, keep booking the festivals and private parties and keep it fresh…that’s the most important thing to me, is to keep it fresh.

Ted: I appreciate that we can play originals and obscure rockabilly tunes to people who accept them with the same enthusiasm as the songs they all know. Once they hear our sound and see what we do, we don’t get requests for artists like Jimmy Buffet or Tom Petty, because they come out with an open mind and embrace us for what we’re about. I just want to say that I’m grateful to them for that.

For more info about Ted Stevens, log onto http://tedstevens.fourfour.com/

Is There a Publix in Siesta Key’s Future?