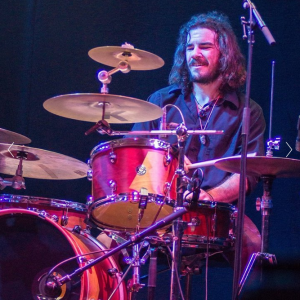 An interview with Sammy “Barefoot” Warren
By Mike Sales

Toward the end of last year, I got one of those calls I love to get; an offer to play a New Year’s Eve pick-up gig after I got done playing earlier…an NYE double! I was told there would be two other musicians there and that they could play all of my songs right along with me, sight unseen (heard?).
I’ve come to trust in this ability from musicians around here, but was completely surprised and really impressed by the way Sammy and his wife Zooey, played every song, without rehearsal, blending enough not to lose me and lending enough to really blow the roof off of the party at The Hub that night. I couldn’t have asked for a better instant band.

Throughout the year, I’ve followed the posts on Facebook, as the two have played with a lot of different musicians with different styles as a pair and individually…and now I get to interview Sammy…

Sammy: I was born in Warner Robins, Georgia, and grew up in a small town outside Dublin, Georgia.

WPT: When did you start playing?

Sammy: As early as I can remember, I’d beat out rhythms on everything…pots and pans and the like, but I started playing on an actual drum set at around age of 8.

WPT: Is that when you started taking lessons?

Sammy: Not really…growing up in rural Georgia, where the school had 100 music students to one band director with a saxophone background, before the internet with YouTube and no instructors in town, I just watched the other kids and tried to figure out what to play. I didn’t actually get formal training until my junior year of high school.

WPT: When did your classical training begin?

Sammy: Fifth grade school band, on through junior college and the university, where they focus a lot on the classical music aspects of percussion. I studied timpani, orchestral & rudimental snare drumming, cymbal work, auxiliary percussion (triangle, tambourine, etc.) marimba and xylophone…many different instruments, depending upon what a particular composition called for. In one piece, you might bounce between gongs, triangle, bells, bass drum and crash cymbals…or just play the snare drum for the whole song.

WPT: When was your first paid gig?

Sammy: My first paid gig was at the age of 16, when I started playing with some friends from high school. Their drummer was sick and I got paid to fill in.

WPT: What kind of music was it?

Sammy: At first it was Christian Rock, which later turned into fast rock music with a punk influence.

WPT: How did you wind up on Siesta Key?

Sammy: Well, that story begins with Grandpa Sam, meeting my Grandma Valerie at the Gator Club, downtown. My father was born and raised in this area…fishing around Siesta Key. He moved to Georgia, but my Grandmother stayed in Florida and when my girlfriend and I wanted to relocate, we chose here…we were married on Siesta Key a few months later.

WPT: Where was the first place you played on Siesta Key?

Sammy: Believe it or not, I arrived here on Saturday night and was playing Monday night at SKOB with a friend of mine from high school, Tony Tyler who has a great band named, “Come Back Alice”. His was actually one of the first bands I played with back in high school. I played with them a lot as an auxiliary percussionist.

WPT: What kind of acts do you play with?

WPT: What can people expect to see you playing on Siesta Key?

Sammy: On Siesta Key, people like to enjoy music during dinner, while on vacation, they prefer more of a low-key sound, and so I usually play the cajon…its like a drum set in a box with a very small footprint. But it’s different every night, even if you play the same song because on an island like Siesta Key, with new people visiting every week, it’s always a unique experience.

WPT: What’s your favorite part about being a professional musician?

Sammy: I get so much joy out of connecting with so many people at the same time. Whether they’re listening to the music in the background as they eat or actually engaging with the band and getting up to dance; it’s beautiful to observe how the sound connects with all of them.

WPT: What’s your most memorable performance to date?

Sammy: I played with the David Smash Band at the International Blues Challenge on Beale Street in Memphis, Tennessee. We competed against 260 bands from around the world and made it into the top 40. The band that edged us out actually came in 2nd, so I’m pretty proud of what we did there. It was an amazing experience to be on the same stage as so many legends. I’m looking forward to going back in February.

Sammy: So far, I’ve been the starving artist, so I’d like to be able to earn enough from music to free me from sweating the bills. I was fortunate, in college to have studied with some people who exposed me to different world rhythms and instruments from around the globe. Music is a universal language that allows me to play with anyone, anywhere. Percussion is some of the oldest music there is and every culture has its unique identity with the drum. I don’t need to be rich or famous, I’d just like to travel the world with my wife, playing music.

The Hub is located at 5148 Ocean Blvd in the Village on Siesta Key and features live music 7 days a week.

SKOB (Siesta Key Oyster Bar) is located at 5238 Ocean Blvd in the Village on Siesta Key and features live music 7 days a week.

Mike Sales is a local singer/songwriter log onto mikesalessings.com for more info.