An interview with Noel Harris 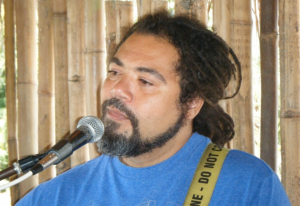 Noel Harris is one of the local artists I’ve envied, for lack of a better word, ever since he hit my radar. With a commanding presence and enjoyable style, he plays fun music at the coolest laid-back venues. Equally at home solo as with a band he himself has generated impressive name recognition, his open mic nights are institutions and he seems to do it all in a walk…with a smile.

Noel: Massachusetts…South Shore, down by the Cape.

Noel: I started playing trumpet when I was a kid…that’s where I learned music theory. I’ve been singing in bands as long as I can remember and I picked up the guitar in college.

WPT: What are some of your musical influences?

Noel: I started out with the Doors, The Stones and Led Zeppelin…you know classic rock, then I got into James Taylor, Beach Boys, Jimmy Buffet, Bob Marley and reggae in general…my tastes are eclectic, I’m even starting to get into Country, which I didn’t expect, but I really like Johnny Cash…and Country isn’t too far a step from Jimmy Buffet.

WPT: How did you wind up on Siesta Key?

Noel: I originally came down to Florida to get away from the snow. I lived and worked all over the state and then moved here to take care of my Grandmother before she passed. I stayed here because I like the combination of the small town feel in a place where there’s always plenty to do. There are live music venues all over, with a wide of variety of styles and a lot of great musicians.

WPT: When did you start playing music professionally?

Noel: 15 years ago…I’ve always sung in bands, but my primary career was building boats and working on them until a truck hit me and broke my back. I had to spend 3 months laid up and healing, so I passed the time learning songs on the guitar. I picked up about 100 songs and decided to change my career to music, when I realized I wasn’t physically able to continue boat work.

WPT: What was your first paying gig?

Noel: At a bar called Kelly’s, now Claytons. It was a dirty bar (laughs) they gave me $25.00 and a full tab, so I’d go there early, drink all day and play that night…it was rough.

WPT: The open mic night you started at SKOB is still going on today; how did that come about?

Noel: When I got here, I found that all of the open mic nights featured house bands that allowed people to sit in with them. They could only play the songs they knew, like Blues, Allman Brothers Southern rock…songs that I didn’t know at the time, because I was more into Hendrix, The Doors and stuff like that.

I had actually played at a bar called “The Thirsty Whale”, up in Bar Harbor Maine where they had an open mic format of giving 15 minutes of stage time to play whatever you liked.

At the time I approached SKOB, Russell & Troy still owned it and they agreed to hire me and try that format. It was the first of its kind in this area.

WPT: How long did you host the open mic at SKOB?

WPT: How do you split your time between playing solo and playing with a band?

Noel: Right now I’m just playing solo because it’s just easier…actually since my bass player Tony Bande passed away. It was too soon and he was a really cool guy…one of the only people I’ve ever worked with who never got angry about anything…he cared about stuff, but would always look for a way to compromise and was a very calming influence…I already miss him. So yeah, I’m just playing solo for now.

WPT: What can people expect when they come to hear you play?

Noel: I’ll run with whatever the people in the room want. If there’s a fun partying crowd that wants to have fun and interact with me, I’ll tell jokes, tell stories, sing parody songs and really put on a show, but if they’re just in the mood for background music, I’m okay with that too…

WPT: …take ‘em where they want to go; don’t try to wrestle with them (laughs)…

Noel: …exactly, I let the mood of the room lead me where they want to go, because as experience has shown, it’s real easy to come off as intrusive or boring, if I don’t pay attention to the cues. Obviously it’s more fun to play for a fun crowd, but it’s most important to be appropriate to the audience in front of me, because at the end of the day, that’s what I’m getting paid to do. No matter what, I’m getting paid to play my guitar and sing, so it doesn’t get much better than that.

WPT: Do you play original songs at your gigs?

WPT: Do you have CDs?

Noel: I’ve got one CD out now with two covers and the rest originals and am currently recording an acoustic singer/songwriter “beach” music original CD.

The band had started a reggae type CD that I may finish with session players up in Nashville. I have a friend who owns a studio there. He gives me a deal…it’s where I recorded my first one.

WPT: What are your future career goals?

Noel: I’m looking at doing some traveling…not touring, I used to tour the East Coast and it takes a toll to be out there full time, but I’d like to travel in the sense of paid-vacations so I can see the world. I’ve always picked my careers, from cooking early on to working on boats and what I’m doing now, based on my belief that I could essentially work anywhere there’s water and people that want to visit.

Noel: Just the other night I was playing at The Daiquiri Deck…I was singing “Fire and Rain”, when I noticed a woman sobbing. I felt really bad, like I’d touched a raw nerve, but she came up after the song and said, “I’ve had the worst week of my life, but you just turned it all around with that song. Its my absolute favorite…these are tears of joy.“

It moves me even now just to talk about it. Being able to make that connection and positively affect someone’s psyche as a musician, whether it’s starting a party and making them dance or cheering them up when they need it the most…that’s the best thing about playing music for a living.

For more information about Noel Harris, log onto noelharrismusic.com

SKOB is located at 5238 Ocean Blvd in the Village