Joey Lavallee is a living example of that dream you may experience, while on vacation in a seaside tropical climate, watching someone play music and thinking, “wow, it must be awesome to just do what you love for a living.”

His professional progression proves him to be the real deal; the guy who moved here, looked around, decided he’d prefer to play music for a living and then made it happen.

While Joey’s rock and blues influences keep his performances invigorated, it’s his attention to the styles that blend with the surroundings that make him a perfect soundtrack for a tropical evening in the Village, whether dancing or just enjoying the music. 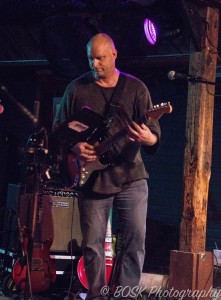 WPT: Where are you originally from?
Joey Lavallee: Lewiston, Maine.

WPT: What are some of your musical influences?
Joey Lavallee: In high school, I was a heavy metal kid, but I got turned on to Stevie Ray Vaughan when I was 18. From there, my musical tastes really expanded to the point that I even started liking music I’d thought was “sissy” music when I was a kid.
Later on, when I began playing professionally, I got the chance to work with and learn from an incredible saxophone player named Mike MacArthur. I got a really good education from him in Jazz, even though I don’t play Jazz, but I learned about some phenomenal musicians. So now, my appreciation has evolved to include many different styles. I’d say that Stevie Wonder is one of my current favorites.

WPT: When did you start playing music?
Joey Lavallee: I started playing guitar when I was 18 years old and picked up vocals later on when I was about 23.

WPT: Did you have training?
Joey Lavallee: I studied guitar in Hollywood at the Musician’s Institute.

WPT: How did you wind up on Siesta Key?
Joey Lavallee: Just on a whim, I came down with a friend. She got homesick and I decided to stay here.

WPT: How did you get into the music scene here?
Joey Lavallee: I had always wanted to do it, but I got a late start. After moving here I went to jam sessions and worked on developing the songs and the style I play now.

WPT: How long did it take you to get gigs?
Joey Lavallee: I was big into Blues, as I still am so I mostly went to Blues Jam’s and wasn’t singing much, just playing guitar. It took me about 7 or 8 years before I started getting gigs as a solo which has pretty much sustained me ever since.

WPT: How would you describe your style of playing?
Joey Lavallee: I would say that my solo gigs are a variety, ranging from Bob Marley to Motown, Blues and James Taylor because a versatile song list works the best for the gigs that I get, but my guitar playing is fairly Blues based.

WPT: How often do you play every week?
Joey Lavallee: I have weekly scheduled gigs and get work from calls to fill in. I also recently started playing duo gigs with Bain Beakley and have started filling the calendar with that too.

WPT: What is your favorite thing about playing music for a living?
Joey Lavallee: Before music, I did ornamental ironwork and was miserable working a day job. I knew there was something else. I had a love of music and made a committed effort to make it my career. I’ve had times of second-guessing my decision when bookings slowed down, like maybe I should have gone back to college and at times I’ve picked up some ironwork during the day in order to keep playing at night, but at the end of the day, this is cool. Music is all I’m doing at the present time. I get to make my own schedule and meet some amazing characters, fellow musicians especially, which I like and I can wake up late, which is good for me. Sometimes, when the bookings aren’t there the earnings can get meager, but when its season and people are tipping it can be a really good living and very rewarding to pursue my passion.

WPT: Do you write songs?
Joey Lavallee: Yes, I write all of the time, in fact I co-wrote a bunch of songs with Greg Paulus and Kathy Perez and they ask me when they can hear me play some of them live. I tell them they can hear Dana Lawrence singing one of them, but so far I prefer to play covers at the gigs.

WPT: Where do you see your career going in the future?
Joey Lavallee: I’d like to continue what I’m doing, and fill in the calendar with more band and duo gigs. My goals now are to get a set schedule established and get some stability with respect to my income so I can focus more on the music than the money.
Ultimately, I’d like to start booking gigs where I only play originals.

You can keep up with Joey Lavallee on Facebook and watch for him on upcoming Siesta Sand Newspaper entertainment schedules.  Click following link to listen to some of his music:  https://www.youtube.com/watch?v=wXhfPGHBfLM