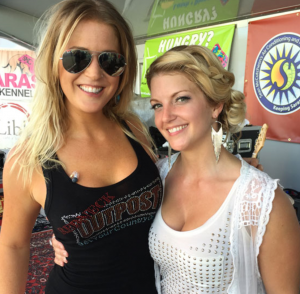 One weekend, when passing through downtown after a gig, I saw a bus with a trailer that read, “The Daisy Dukes Band”, parked in front of the Gator Club. My immediate thought was; “they must really have their act together”.

Since I’m always looking to see what the next band has to offer, I made it a point to drop in for a performance to find that my initial impression was correct.

“The Daisy Dukes Band” featured 2 girls fronting and singing most of the songs, guitar players, a steel player, a bass player and a drummer who seemed to know the perfect harmonies to sing for every song. The whole stage at the Gator Club, was filled and the dance floor was no different as the band played song after song of familiar super country hits, including selections that are still climbing the charts.

This being season and everyone including me being so busy, it made gathering the whole team for an interview impractical, but I did my homework, so as to share some information about this local “super group” and their Siesta Key connection.

Mark Serbin began his musical life with the French horn in band and orchestra in Junior High School. While at school, he learned to play bass and in 1997 began performing with various groups. His early influences were the bass players of such classic super bands as, “Cream” (Jack Bruce), “Led Zeppelin” (John Paul Jones), “The Who (John Entwistle) and “The Beatles” (Paul McCartney).

Mark passed his love of music onto his son, Scott.

Scott Serbin was born and raised in Sarasota FL and picked up the guitar in high school. He practiced, took lessons and played at home with his dad, Mark, and was performing live on stage within a year of picking up the instrument.

Scott joined a band named “Cleanser” that played big stages and opened for national acts in the Orlando area. They played covers and originals and recorded albums and courted record labels.

Scott took his band and music business experience back to Sarasota where he met guitar player Todd Brue.

Todd, who was also born in Sarasota began playing guitar at the age of 10 and taught himself to play, through focused study while attending FSU. His first band was “Savoy Blues Band”, where he played rhythm guitar.

He and Scott later formed the band “My Friend Scott”, in 2002 along with Scott’s dad, Mark. The three became a tight knit core, playing with various other members through the years and eventually formed of “The Daisy Dukes Band”, which features Scott and Todd playing guitar and singing the male lead vocal parts, Mark playing bass, James Byme on drums, Bob Dominick on pedal steel, Ellie, Kari and Rachel on lead and backing female vocals and David Ratliff on guitar.

Ellie May sings harmonies and co-fronts The Daisy Dukes Band. A true Sarasota Native, who’s parents were both musical, she’s been surrounded by music and arts her entire life. Her vocal influences were Joni Mitchell, Bonnie Raitt, Alison Kraus and Lauryn Hill.

She grew up singing, dancing and acting and got an early start at formal training attending Booker High where she studied musical theater and went on to join the company at “The Player’s Theater” in several productions as well.

Ellie met Scott and Todd in 2008 and formed a rock band, which they transformed into “The Daisy Dukes Band” of today, when Kari, joined the group and they turned their focus toward modern country tunes.

Fellow Daisy Dukes lead vocalist Kari Rae, was born in Dallas and moved all over Texas growing up. She learned to sing in church and in the car and at home with her father.

She continued to sing and pick up various instruments through school and took formal music lessons while attending college, in Mobile, AL where she could also be seen singing and playing guitar downtown. She also plays flute, saxophone, oboe and piano.

Kari moved to Sarasota in 2010 where she met Ellie May, while working at the Daiquiri Deck in the Village on Siesta Key. Their friendship and effortless blend of their vocals was a perfect fit when The Daisy Dukes Band was formed.

Rachel Matthes, the band’s newest member was born in Southern Ohio and grew up there surrounded by musical influence. Growing up she found herself too shy to perform, but channeled her creative talent into sketching, painting, journaling and writing poetry and prose. These musings eventually developed into lyric writing and led her past stage fright into performing at open mic nights at a wine bar where she worked.

Since Rachel is married to one of the co-owners of Daiquiri Deck, she met Kari and eventually joined “The Daisy Dukes Band”. 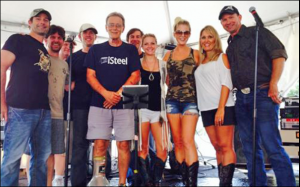 If the experience of the individual members, the staying power of the group’s founders and the precision by which The Daisy Dukes Band was launched is any indication of their future in the business, its safe to say that going to see them locally, while you still can is a treat you deserve to give yourself.

You can find out more about the band and upcoming shows by visiting http://daisydukesband.com/index.php

The Daiquiri Deck is located in the Village on Siesta Key at: 5250 Ocean Blvd Siesta Key and features live and DJ music weekly.

Arts on the Horizon: August