An interview with Bain Beakley
By Mike Sales

Mon through Fri, I roll my gear off of the BluQue patio stage at 3 O’Clock, to make way for Bain Beakley, who plays the happy hour spot 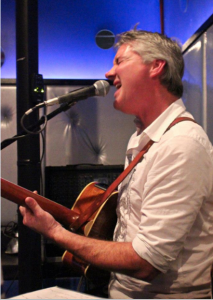 3:30-5:30pm. I’ve come to know him as friendly, talented and a great networker…he seems to know everyone. I interviewed him on the BluQue stage, while he set up his gear…

Bain: I was born at McDill Air Force Base, where my father was in the military, then moved to Sarasota, where I was raised.

WPT: When did you start playing guitar?

Bain: When I was 14, my grandfather bought me a red Fender Squire electric guitar, with one pick-up, from Thoroughbred Music Store on Bee Ridge, and I taught myself to play it.

Bain: It depends on where I’m playing. I like Country music, Southern Rock, Rock, Blues…I enjoy playing Country music, because I grew up on that…older Country. My brother turned me onto the Eagles and the Allman Brothers when I was a kid, but I play a very wide variety of genres, appropriate to the gig I’m playing.

WPT: Do you write originals?

WPT: When is your CD coming out?

Bain: Ha ha, its been a long, ongoing project, that I hope to complete soon.

WPT: When did you start playing professionally?

Bain: I was 21 years old, my buddies and I formed “The Holy Mackerel Band”. We played at parties and had fun, and then we got our big break and landed a gig at the Old Salty Dog, where I worked in the kitchen. It included all the beer we could drink. We started out as a 5-piece band, featuring 3 guitars, bass and drums, but the two other guitar players got scared and quit, leaving the 3 of us. We played 3 songs; Knockin on Heaven’s Door”, Feelin’ Alright” and “Mama Kin” jamming for 30 minutes each, without a sound system. I began playing professionally, around town, with a regular schedule, in my late twenties and finally quit the day job to pursue music full time in 2003.

WPT: How many dates do you play every month?

Bain: About 25 gigs per month.

WPT: How do you stay so busy?

Bain: I network with other musicians and never refuse a good gig. When someone approaches me with a gig, I play it if I’m available and find someone who can play it, if I’m not. I never say no, so people seeking talent always feel confident to call me, because they know the gig will get filled. The musicians around here, who work like that, always stay working.

WPT: What do you consider your career highlight, so far?

Bain: I was the guitar tech for Dickey Betts, on tour, for about 4 years.  That was a great experience. There were a lot of really cool shows. We toured overseas, to Spain, Italy, Norway, Holland and Germany. There were really a lot of cool gigs. I could talk about it forever, but what made the experience for me, was that I really love the music. I worked the shows, night after night and heard the same songs, over and over and loved my job, because I love the music…I couldn’t have done it otherwise.

WPT: How did you get that position?

Bain: A friend of mine, who was working for a production company, out on the road with the “Chinese Democracy Tour”, headlined by Axel Roses’ new line-up of “Guns & Roses”, after he broke off from the original GnR and featured “Papa Roach” and Sebastian Bach, from “Skid Row”, called me to go out with them as their guitar tech, where I worked for a few months, including a sold-out show for 20,000 people at Madison Square Garden in New York. I had to return here for gigs I was obligated to play and called Carlos Rodriguez, a friend who was on a break from working with Dickey Betts, to finish the tour in my place. He subsequently called me to replace him, with Dickey, when he landed a job on tour with Keith Urban.

WPT: What’s your favorite part about being a full time musician?

Bain: I like working for myself, having the freedom to pick and choose my schedule and meeting all of the different and interesting, sometimes bizarre, people.

WPT: What are your future career goals?

Bain: I love the gigs I’m doing now, but would like to make songwriting more a part of my career.

Bain: Have fun. When I’m onstage, doing my thing, I have fun. Even when I make a mistake or hit a wrong note, I’ve learned to laugh at myself. You would never catch me having a fit if something went wrong. I just adapt to it, move on and roll with it. By doing that, it sends a relaxed attitude to the audience and they have fun, as well.

Bain Beakley plays weekly at several venues on Siesta Key and Sarasota (see calendar) and you can find him on Facebook.

Below is a calendar of venues offering live music on Siesta Key and her surrounds. To enlarge the calendar, simply click on it. 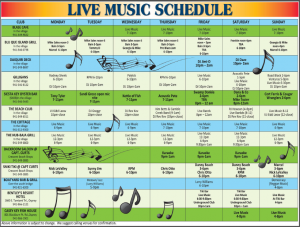