An interview with Frankie Catalina 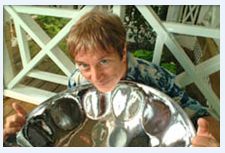 when I first started pitching gigs in the area. In fact, the more tropical the venue, the more likely Frankie’s name would be on the bill.

It’s no wonder, because I’ve since come to know him as, the guy they call when looking for a real steel drum player. His website has countless testimonials and his calendar is filled nearly everyday.

We spoke over the phone one afternoon in between gigs…

Frankie: Growing up, I lived mostly in St Louis and Los Angeles, here in the USA, but lived in Trinidad, for a while when I was a kid.

Frankie: I began playing guitar and piano at an early age. I started out playing in bands and then went solo in the mid-90’s, when I got a gig as a piano player on a cruise ship.

WPT: Did you live in Los Angeles to pursue music?

Frankie: I spent a lot of time there as a kid, but moved back for music, years later. I played in bands there. One of them was called, “Working Class”. We played all of the clubs around L.A. and the area, as well as 3 months in Hawaii.

WPT: How did you land the gig on the cruise ships?

Frankie: Someone literally discovered me at a gig, after I’d gone solo as a keyboard player. They referred me to someone they knew, who booked talent for cruise ships, so I followed up and got hired onto the rotation of playing for the Norwegian Cruise Line and Celebrity Ships.

WPT: When were you first introduced to the steel drums?

Frankie: The steel “pan”, as its called in Trinidad impressed me early in life; when we lived in the Caribbean, but I really developed my love for the instrument during the 11 years, I played on the cruise ships.

WPT: How long did it take you to learn the steel pan…did you have to take lessons?

Frankie: No, I’m self-taught. I took to it fairly quickly, because I already had a solid foundation of music theory, from my experience with other instruments. It didn’t take long to learn some simple songs and build my repertoire and develop my own style from there.

WPT: About how many songs, would you estimate, you can play on the instrument today?

Frankie: Today?…thousands. I’m constantly adding to my catalog. It’s important for me to remain relevant to all age groups.

WPT: How did you find your way to playing on Siesta Key?

Frankie: We moved here with the kids about 12 years ago, and I just made the rounds to all of the places that hire musicians…and started getting gigs. I played every week at Tommy Bahamas’ for 8 years and have built a stable schedule of gigs around the area as well.

WPT: What can an audience expect to hear at your show?

Frankie: I draw music from genres relevant to the audience in the room. For an older group, I’d play “Yellow Bird” and “Harry Bellefonte” stuff. If they are a bit younger, I’ll play Jimmy Buffett and Bob Marley. When a song really strikes me, I find an island beat that will fit perfectly to it. This allows me to vary my catalog and include songs by artists such as Paul Simon, The Beatles and other artists who wouldn’t otherwise fit on an island, Caribbean set list.

WPT: What sort of gigs do you play?

WPT: Have you recorded?

Frankie: Yes, I have released two cds. One is currently sold out and on back order, but I have my self-titled cd available at all of the shows.

Frankie: I can honestly say that between the weekly gigs, the private events and recording cds, I’m very happy with what I do. I feel very fortunate and grateful to be able to generate enough income doing what I love and look forward to continuing as long as I can.

You can find out more about Frankie Catalina and contact him to play your event by visiting http://frankiecatalina.com/steel-drum-music-sarasota-bradenton-suncoast-florida

BluQue Island Grill is located at 149 Avenida Messina on Siesta Key and features live music all day, 7 days a week.