The promo and reputation of “Kettle of Fish”, wa 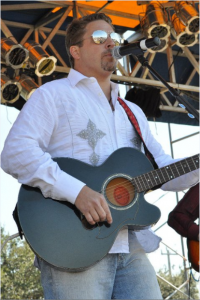 s, so well executed and band founder, front man, Dana Lawrence, (AKA The hardest working man in SRQ showbiz) kept his schedule so filled that I was hearing good things long before I finally got to see them, headlining a festival, I MC’d.

These days, I MAKE time to go see them. The energy, polish and musicianship of Dana and guitarist, Thorson Moore, bassist, Todd Cook, keyboardist, Matthew Frost, and drummer, Garrett Dawson, is literally world-class and they always draw a crowd.

I caught up with Dana at a table outside of The Hub, while we were both on break from our respective Siesta Key lunchtime gigs…

Dana: Boston, by way of Key West, California, and Nashville, but this is home now.

WPT: When did you start singing?

Dana: I began singing in college. I filled in for a friend’s band, whose singer couldn’t make it to an event and I knew some of their songs. We played 6 songs. It was “an amazing rush” and people encouraged me to continue singing. It had always been something I enjoyed, and did for fun, but it was on the backburner for a long time.

WPT: How long after that, did you start playing professionally?

Dana: Ha, many years. I moved to Key West, where I wrote for a local paper and ran a guesthouse, and then to San Francisco, where I tended bar and became a bar manager.

In Key West, I began learning how to play guitar and write songs. I’d play, far off from Duval St, way out on the southernmost point pier, to spare people, because I didn’t think I was good, yet, but did get a gig, hosting an open mic night.  At that time, I didn’t play many originals out.

WPT: You wrote for a paper?

Dana: I was an English major, in college, and my goal was to write for Rolling Stone Magazine, because I loved music, but didn’t think I had any musical ability or even an inkling to perform. While in school, I wrote short stories, which proved to be a good prep for songwriting.

WPT: Are you currently writing any articles or blogs?

Dana: No, between raising my daughter and playing up to 7 gigs per week, I don’t currently have time.

WPT: How did you wind up in Siesta Key?

Dana: Out in California, I began to burn out on the bar business, so I made a decision to help out with the family business, which is based out here in Venice. I began playing open mic nights and got my first island gig, at Siesta Key Oyster Bar (SKOB), playing Mondays, for fun, on the side. As the economy slowed, I began transitioning away from the family business and more into playing music, until it was all I did for a living.

WPT: How long ago did you land the SKOB gig?

Dana: This January it will be 10 years.

WPT: When was “Kettle of Fish”, born?

Dana: I’d always liked that name for a band, and played the first publicized band gig, under that name, out in San Francisco, in 2001 at the Red Devil Lounge, as a duo, playing cow-punk songs, like Hank Williams Sr and some originals.

WPT: What can people expect to hear, when they come to hear you play?

Dana: We play blues, with a lot of soul, a little funk and the energy of rock and roll. Thorson is very funky and Garrett has a Latin and afro-Cuban background which creates interesting dynamics, makes it fun and creates the energy I play off of.

WPT: You have an amazing voice, with the solid, consistent vibrato of an r&B singer, which you power, full-bore, like a rock singer. Who are your influences?

WPT: How many songs have you written?

WPT: How many cd’s have you put out?

Dana: We released our first one in April.

WPT: You’ve been playing 10 years and have a tremendous following; you play all over, headline festivals and even landed a spot at the Wanee Festival. Why did it take you so long to record?

Dana: We’ve been “Kettle of Fish”, ever since we first started playing at SKOB, with Mason Dunn on guitar, who preceded Thorson, who’s now been with us for about 7 years.

We started as a duo, when I still had a day job and then got more serious 7 years ago. I’ve always been so busy and continue to be a perfectionist. Rather than release anything that would not properly represent us, I waited until we were ready. I’m happy with what we came up with, even though it was an EP we rushed into production, in order to have ready for Wanee. I look forward to adding more songs, to create a full-length album.

WPT: What songs are on the EP?

Dana: A few old songs of mine that evolved with the band adding parts I never would have thought of.

WPT: What is the highlight of your career?

Dana: Hanging out with Jackson Browne, who is one of my all-time favorite songwriters, in his dressing room for about 45 minutes, just talking, as peers, was an experience that may never be topped.

WPT: What are your career aspirations?

The band has plans to record a live cd, and we’re still writing songs to finish the current full length album.

Long term, I’d like to tour as an opening act for major label artists, and beyond that Madison Square Garden.

WPT: Who are some of the local bands you go to see?

Dana: I like to go see The Venturas, featuring Greg Poulos, Tony Tyler, The Lounge Cats, when they used to come down from Tampa, and Billy Seward and Soulfonic, out of Tampa.

Tribute to a Drumming Warrior