An interview with Cindy Welsh
By Mike Sales 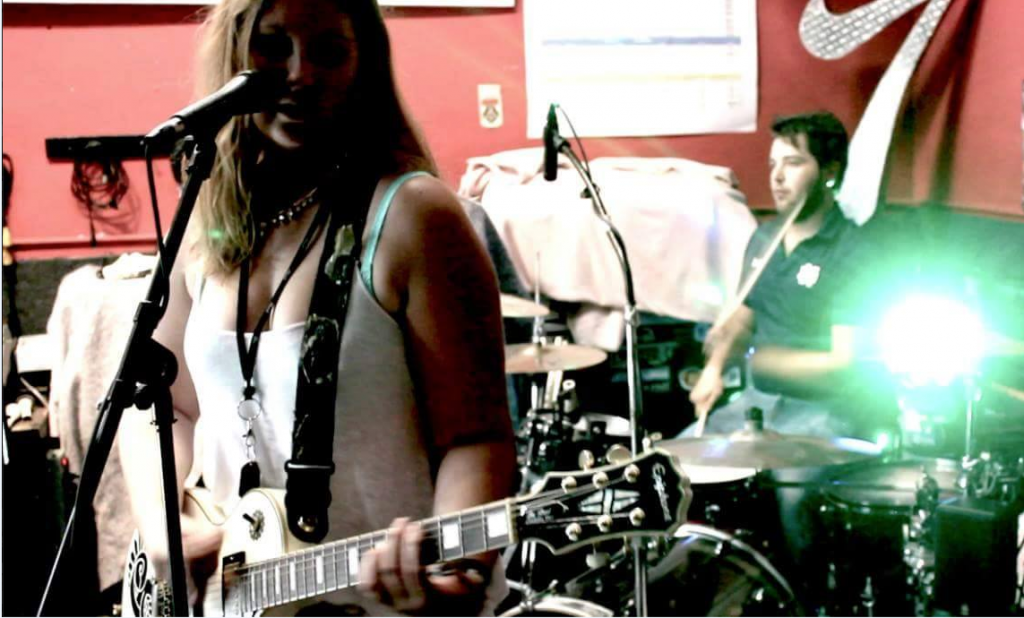 The first time I heard Cindy Welsh, was at the Siesta Key Oyster Bar’s weekly open mic night, held each Tuesday. She was playing in a duo and I remember being impressed with her obvious love for the music and how it showed in her dedication to the performance and her unique sound. A recent visit to her current duo’s YouTube channel shows her still as dedicated as ever with her sound evolving beautifully.

WPT: Born and raised here in Florida? That hardly ever happens.

WPT: When did you start performing?

Cindy: I started playing with Zac Yoder in 10th grade and on Siesta Key, when I got a little bit older.

WPT: Who were your early musical influences?

Cindy: My uncle Joe played all of the time when I was young. He played lots of weddings and I used to go with him, so he was a huge influence on me and Zac Yoder and Skylab were the only band I would go follow, every week.

WPT: Who does your act consist of?

WPT: What can people expect when they come to see you?

Cindy: A refreshing new take on old classics and my version of pop songs they haven’t heard on the radio in years.

WPT: What’s going on with your career these days?

Cindy: My duo, “Overruled” has been invited to open for a huge act named, “Beside the Bridge” in Europe and then play at a classic car week that draws around 30,000 people in Sweden.

WPT: How did that opportunity come about?

Cindy: I met a group named, “Be Bop-a-Luba” when they were visiting Siesta Key and then attended their event in Europe last year and sat in with them. They invited us to perform this year, so we’re trying to raise the funds, through our GoFundMe page to make that happen. If we do, we’ll be over there playing for about a month.

Cindy: I would like to eventually do more of what I’m doing now; touring all over, playing music, meeting people and seeing the world.

WPT: Do you play originals?

Cindy: Yes, Joe writes all of the time, so we go through his demo catalogue and select songs to learn. We’ve been recording a lot.

WPT: Where do you record?

Cindy: Actually, we’ve been recording in a car, so we don’t have to pay for studio time. It acts as a nice isolation booth.

WPT: Are these songs going direct to iTunes or are you putting an album together?

Cindy: We’ve kind of jumped around on styles so we’re releasing them as singles, but once we get them all done; we’ll probably put them together on an album.

WPT: How would you describe your originals?

Joe: They’re pretty much based around what western culture is looking for nowadays…very universal for anyone to listen to.

Cindy: Out in Myakka, someone organized a cancer fundraiser for our friend Tyler. They had a huge stage. RJ Howser and the ChillBillies also played. We had the late night slot when everyone was all party’d up and it was a lot of fun. We ran out of songs and just started pulling material out for the first time…we played all night.

WPT: What’s your favorite part about being a musician?

Cindy: Performing and playing for the crowd and learning what each group wants to hear, because every gig is different and the blend of people is always unique, you have to adjust yourself to those people and I think that’s fun…trying to pick out songs for certain people.

WPT: Where do you play in town?

Cindy: We’ll be playing at Applebee’s and the 210 Tavern and here on Siesta Key, you can see us at the SKOB open mic on Tuesdays.

You can watch videos of Cindy’s act, “Overruled” on their YouTube channel “Overruled Music”, where you can also find a link to their fundraising page.