An interview with Kara Nally 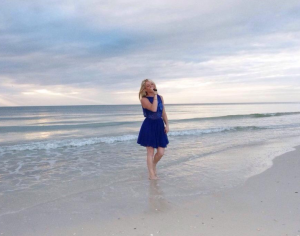 The first time I heard Kara Nally, was at SKOB. She was guest hosting the open mic, with Sandi Grecco, singing a little, introducing the various participants and making the rounds to make everyone feel welcome.

Every time I go to see her, like on Thursdays at the laid back open mic at Lelu Café, she is exactly the same; delighted to see everyone, attentive to the audience and on top of everything. Its as if she were hosting a party at her house, which isn’t too far from the truth. When Kara has a gig, it becomes her house. Of the local full-time musicians, she is one of the best self-promoters in town. A quick Google search will tell you where she’s playing, nearly every night of the week, because she is constantly posting and promoting. She plays the top venues and always fields the best musicians in town for her band. To see her show is to watch a tremendous entertainer having the time of her life.

I interviewed Kara, on the patio at one of her open mic nights; while some guests were onstage…she had me pose for a picture with her first.

WPT – How long have you been singing?

Kara – Since I was in first grade. I auditioned to sing “Hero”, by Mariah Carey, but sang in my first band at the age of 14, and continued to sing with various bands until I moved down here and took a little break.

WPT – How long have you lived in Sarasota?

WPT – What was your first gig in Sarasota?

Kara – It was at Sarasota Vineyards, singing to tracks.

WPT – How did you break into the band scene here?

Kara – I got into a band off of Craigslist. I also went to Rich & Pete’s Broadway jam and they suggested I go to the Flying Dog jam, then I went to Al Fuller’s jam and wound up meeting some really talented people.

Kara – No, but up until 8 months ago, I was working 10-6pm Monday through Saturday at Ana Molinari, while I was gigging 5 nights a week and I was exhausted.

WPT – How many gigs do you play every week?

(There’s a pause in the interview, when bass player Johnnie Barker comes out to the patio to say hi, show Kara his new ipad, and talk about studying for his pilot’s license. The conversation on my interview recording is fun in that it really conveys the family-like nature of the music community in this town. I couldn’t help but listen to the whole interaction, so I’m mentioning it.)

WPT – Which local bands do you go to see?

Kara – On the rare occasions I get to go see anybody, I go see “Kettle of Fish” for sure, “Lauren Mitchell” and “Nick LeValley”.

WPT – Yes, and as you know, I interviewed Dana last month, how cool is that?

Kara – We both worked at the same little coffee shop in Norwell, called “Drums Emporium”.

What can the audience expect to see at your show?

Kara – It’s a cross between funk, rock, blues and pop.

WPT – What’s your favorite thing about being a professional musician?

Kara – The fact that I get to tell people that. (laughs) Being able to do something that I am truly passionate about is the coolest feeling.

WPT – What are you career goals?

Kara – Right now, I am working on recording an album of originals. Long-term, I want to go as far as I can go.

WPT – Do you play originals at your shows?

WPT – What’s your message to your audience?

Kara – Love your life, and don’t let anybody hold you back.