An interview with Rodney Shenk
by Mike Sales 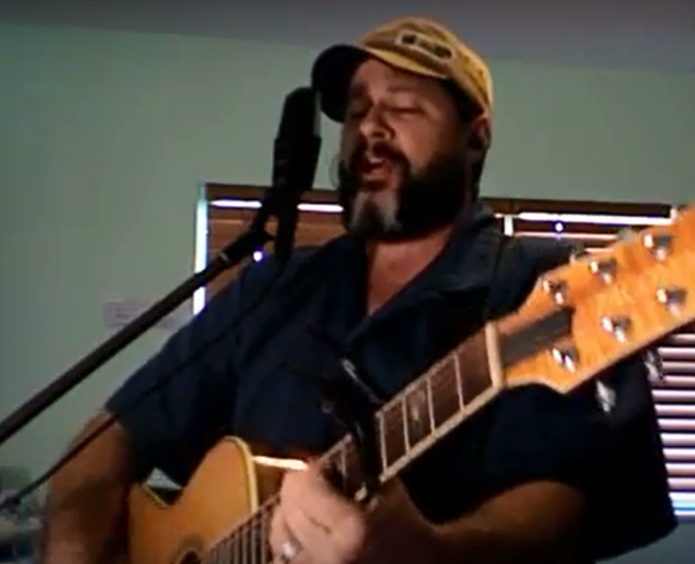 One of the cool things about writing this article is that it requires me to seek out musicians to write about. I wind up listening to and learning about artists who play when I do and would otherwise never hit my radar.

So, when a customer came in and said she was at my gig because her favorite, Rodney Shenk, was off for the week, I couldn’t wait to find out who Rodney was.

A quick listen to videos on his YouTube channel reveal a crisp clear singing voice with an incredible range, a great sounding guitar and the skill to play it.

Rodney: I’m originally from Newport News, Virginia and moved here when I was 9 years old.

WPT: When did you learn to play music?

Rodney: I grew up Mennonite. In Mennonite churches, you start singing as kids. At a very early age I was singing a cappella four-part harmonies, from the hymnals and learning to sight-read.

WPT: When did you start performing?

Rodney: I had a musical family. In the beginning my twin brother and I sang the melody in unison while my mother and father took harmony parts, and then they switched and we started singing harmonies. We played Southern Gospel, A Cappella harmony stuff and some Bluegrass, I play banjo too…we toured churches up and down the East Coast as a 4-piece family group. We made a recording too.

Rodney: I picked up the guitar in eighth grade, added the 5-string banjo, then the bass, drums, some mandolin, etc.

WPT: What kind of ensembles were you playing with?

Rodney: Along with the family group, there were choirs in Church and school and then my brother and I formed a duo, with him on guitar and me playing bass. We added two more players and the four of us eventually became “The Sharks”…playing 80’s dance pop, which was called “Alternative” and “New Wave” at the time. The Sharks became 606 in 1993.

WPT: Was that your first professional band?

Rodney: Yes, we played the Beach Club, back when it was a dive bar…we did 7 nights a week around here. We put out three CDs and Geffen Records was looking at us for a while.

WPT: So you did originals?

Rodney: Yes, about 1 out of 3 was an original song.

WPT: Do you still play with a band?

Rodney: I mostly play solo, or duo with my wife, Mj (TheHappyGoLuckys), or with Sharks/606 guitarist, Myron (The Retro Duo). We rarely play as a band any more, but if we do, it’s under the name 606.

WPT: Have you always made a living as a musician?

Rodney: My dad’s a contractor, so I worked for him until 1989 when my brother and I went fulltime into music. I played fulltime for 10 years until I got the opportunity to learn the aluminum trade, just by chance. I had offered to clean my friend’s warehouse, just for some extra money and he offered me a job with his seamless gutter business. I would play all night, load out and get home at 5am, nap for a couple of hours and then head out to work the day job, catch another nap and then head off to my gig. I was living on no sleep at all, but I worked my way up to manager, and then was recruited by a couple other companies before starting my own business in 2005, Shenk Seamless Gutters & More, which I operate today.

WPT: How many people do you have working for you?

Rodney: It’s just a small family business…my two oldest sons, my daughter in-law, a helper we hired, and myself.

WPT: How does owning a successful business affect the way you conduct yourself as a musician.

Rodney: I’ve always treated music as a business. Back from the beginning, even with the Sharks, we were incorporated and I’ve always taken a professional approach.

WPT: Where do you play these days?

Rodney: My house gigs are Mondays at Gilligan’s, Thursday nights at Cha Cha Coconuts (St Armand’s Circle) and every Saturday night at Harry’s on 41 at Stickney Point. I also play once a month with my wife and a few other nights a month as well.

WPT: What can people expect to see when you play?

Rodney: My set list hangs out in the 80’s and 90’s but I jump back to the 60’s and 70’s. I also play my own versions of current songs, so it runs the gamut. I like it when people say they haven’t heard a song in a while and appreciate me playing it live. I like to play college radio hits that made it to the mainstream.

WPT: What is your instrumentation?

Rodney: I can play a whole night with just a guitar, but I also have self-made backing tracks that I recorded, so I’ll play live and with the tracks, depending upon the feel of the room on any given night.

WPT: Do you still play originals?

Rodney: I write all of the time, and record multiple tracks as I sculpt the song. A lot of them would lose something if I played them acoustically, so I only play the handful of originals that work at my gigs.

WPT: Where do you see your career evolving?

Rodney: My first love is songwriting. I was runner-up in the John Lennon Songwriting Competition, and I won a People’s Choice Addy award for a jingle I wrote. I’d like to have some success in that area. I wish I had more hours in the day.

WPT: What is your favorite thing about being a professional musician? 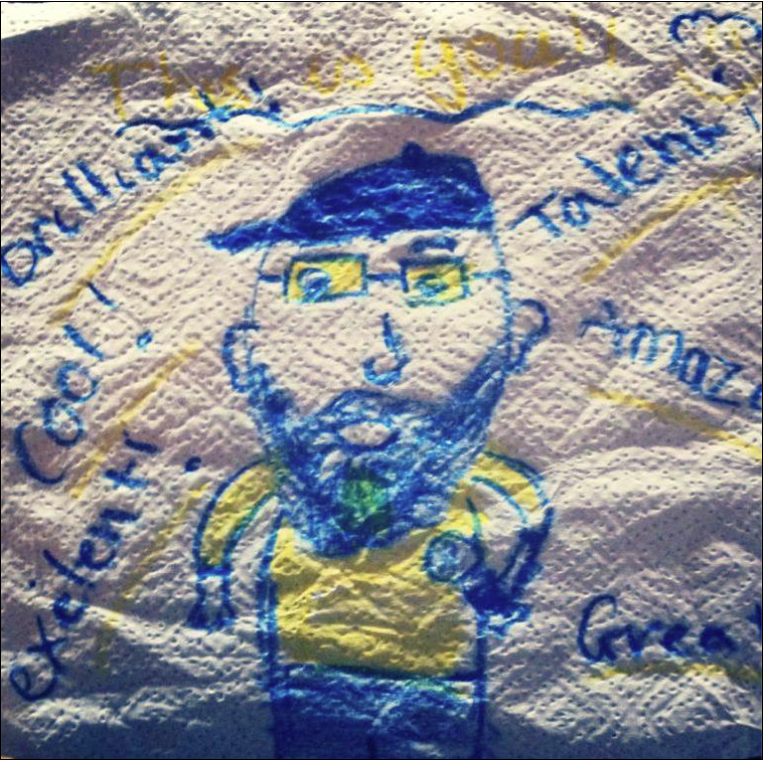 Rodney: I love people. I’m a people watcher. When I’m playing, I’m not thinking through my songs, I’m watching the room. I love when parents send their kids up to put money in the jar, not because of the money, but because of the interaction. The restaurants where I play provide crayons to children and a lot of them flip their little menus over and draw a picture of me. Whenever I get one I stick it in my guitar case and I see the stack every time I open it…it warms my heart and I love that.

You can see and hear Rodney on his YouTube channel: RodneyShenk

Giiligan’s features live music 7 nights a week and is located in the village at: 5253 Ocean Blvd. Siesta Key

Mike Sales is a local singer/songwriter for more info log onto MikeSalesSings.com

August Arts on the Horizon

Nature and you together