An interview with Mike Tozier 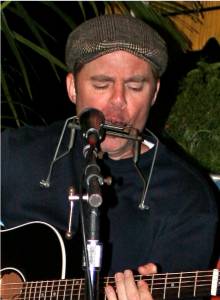 interpretation of cover songs. His guitar playing is accomplished to the point of being able to present the iconic parts we all know and love, so while the song remains totally recognizable, he delivers it with his own unmistakable style that is nothing short of incredible, even if you hang onto every note, as we found ourselves doing when we went to SKOB to catch his band and get an interview…

WPT: I understand you’re currently based in the Tampa area, but you play here (SKOB) every week; how many zip codes do you play weekly?

WPT: Which did you learn first, vocals or guitar?

Mike Tozier: Definitely guitar. It was about 25 years ago.

WPT: How did you come to start playing professionally?

Mike Tozier: When I was a lifeguard at Temple Terrace Country Club one of the other lifeguards who heard me play guitar like I’d do during the week when it was slow, said he was a drummer and suggested we start a band. I agreed and recruited a classmate from USF who played guitar & bass. We practiced in my garage and thought it was just a fun thing, until the drummer went out and booked us a gig at…well, to call it a dive would be a compliment. It was called the “Time Tunnel Pub”, on Fletcher Avenue in Tampa, which used to be the bad part of town. We played there for a while. It’s the good part of town now, but the pub is not there anymore.

After that I met some other musicians and joined their band. I was in college and had a lot of fun playing and we got a Budweiser sponsorship. We were making some money but after we graduated the band broke up, so I started doing a solo thing.

After that, I joined another band. Each opportunity just unfolded in the course of being drawn to and doing what I enjoy. There was never any big plan, but I always stayed after it.

WPT: How did you wind up playing on Siesta Key?

Mike Tozier: I was friends with Damon Fowler, before he became a national recording artist and his uncle referred me to play here at SKOB, which led to offers to play at other venues in the area.

WPT: How long ago did you start playing here?

Mike Tozier: Over 13 years ago.

WPT: So, you’ve been playing here every week for more than a decade?

Mike Tozier: Yes, minus a year & a half when my fiancé and I moved to Murfreesboro Tennessee.

WPT: Just outside of Nashville, why Nashville?

Mike Tozier: From my understanding, New York, Los Angeles, Miami and Nashville are the music hubs, nothing against them, but the other cities just didn’t have the same appeal to me so I chose Nashville.

WPT: Did you make any headway there?

Mike Tozier: When I first moved up there, it seemed like I was. I was invited to play at the Americana songwriters’ conference and I got work pretty quick, but just in barrooms, which didn’t pay very well.

I wanted to roll the dice while I was still young enough, and shoot for a record deal, but as it turns out, the fact that I don’t sing like a country guy or play country guitar, matters in Nashville and I came up snake-eyes, so, I moved back here when I realized what a good situation I’d walked away from and they were gracious enough to welcome me back. Its good too, because I missed my family when we were gone.

WPT: Have you released any CDs?

Mike Tozier: I released a cd in 2006, pressed 1000 copies, sold about 800 and gave all the rest away but half a dozen I’m holding onto, just because. You can get it on iTunes, but make sure to look for the album entitled “Road of Life”, because there’s another Mike Tozier on there that isn’t me.

WPT: That’s heartbreaking and I know how you feel. There’s a barber on YouTube named “Mike Sales.” (laughs)

Mike Tozier: Well, apparently up in the Northeast somewhere, there’s a kid named “Mike Tozier” who’s a real (tail)-kicking wrestler, because “Mike Tozier wins wrestling tournament…” comes up when you Google my name.

Mike Tozier: I’m considering putting a link to that on my website, just to mess with people.

WPT: How many originals do you write?

Mike Tozier: I used to write more before I went to Nashville and played my best songs for the people at ASCAP (American Society of Composers, Authors and Publishers). They informed me that the reason people here liked my songs was because they liked me, not that they were good songs. That lack of encouragement kind of took the wind out of my sails. It was kind of demoralizing. I tried to adjust my writing style to something more country, but I like what I like and don’t really enjoy trying to be something I’m not.

WPT: Now that you’re back, what are your current career goals?

Mike Tozier: Right now, I’m reassessing that very thing. Its actually funny you asked, because in the last month my fiancé told me, “You need to have a come-to-Jesus meeting.” I wouldn’t say I’m in transition, because I love what I do and where I play, but I am thinking hard as to what my next move is going to be, how the next opportunity for career growth is going to come from and what I should do to prepare myself for it, because I don’t think its going to just present itself…I’ll have to do something and I’m not sure what that is yet. In the meantime, I’m constantly increasing my cover repertoire.

WPT: What can the audience expect when they come to see you.

Mike Tozier: Entertainment; ice cold drinks & good food from a friendly staff and familiar songs they may not have heard in a while. They can expect a great show.

SKOB (Siesta Key Oyster Bar) has live music 7 days a week and is located at: