An interview with RPM
By Mike Sales 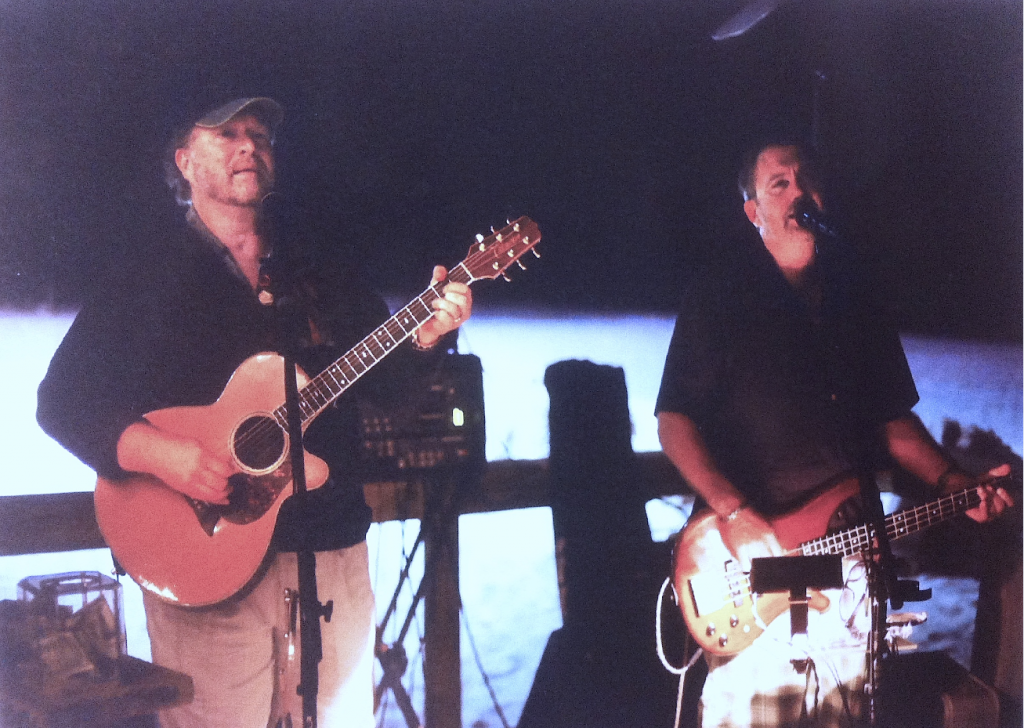 You may recall an interview from the Siesta Sand January issue, of this year, which featured RPM’s Mark Waelti. During that interview, I learned that the duo, consisting of Mark on bass and vocals and Randy Marsh on guitar and vocals had been together for 30 years and were planning an anniversary concert to celebrate.

I sat down, this time with both Mark and Randy to get all of the details of the event…

WPT: To begin; what’s the secret to staying motivated, booking steady and playing music with the same duo partner for 30 years?

Mark: Well, without a doubt, it couldn’t have been done without the generous, loyal and humbling support we’ve received from our following, year after year. The people who come out to enjoy the music with us, night after night, keep this whole thing going and we really appreciate them more than words could express.

Randy: As for us working together so long; we became friends before becoming business partners. It’s always about what you do, but it’s also about who you’re doing it with.

Mark: We split the responsibilities and the rewards evenly and though we don’t agree on everything, we find an equitable way to settle everything. It actually gets easier the longer we play together.

Randy: I also want to point out that it couldn’t have been done without all of the venues who’ve hired us and trusted us to entertain their customers and keep them coming back. Those partnerships have been vital to our success and we appreciate every one of them.

WPT: Where and when are you having your concert?

Mark: The concert is being held at The Venice Theater, Sunday October 9th.  The doors open at 7pm. There’s a full bar and the concert starts at 8pm.

WPT: How did you decide on The Venice Theater?

Randy: We did our 20th year Anniversary Concert at The Players Theater in Sarasota. When it came time for our 25th Anniversary, we found the Venice Theater and spoke with Allan Kollar who was very welcoming. We felt comfortable at the venue as did our following, so we decided to have our 30th there too. It’s an intimate venue and they allow drinks inside the theater.

Mark: It becomes an everyday thing. Allan is the Theater Director and has been wonderful during all of the planning. This event is a partnership with the theater, so it’s working out very well. Allan is overseeing everything at the venue and catering to our requests to accommodate the band and our following and the VIP section and we’re assembling the band, booking airline flights and putting the music together. What’s nice about it is that we’re able to sell tickets on our own. They are available on our website as well as the theater website and ticket sales are going very well. We’ve sold hundreds of seats already and are hoping to sell out.

WPT: For people who haven’t been to see you before; what can they expect from the concert that they won’t see at one of your weekly shows on the island?

Randy: It will not just be Mark and me…we’ll have a full band as well as some special guests flying in from all over the country.

WPT: Who’s going to be in the band?

Mark: Our Drummer, Michael Finley, who’s been our drummer for years will be playing that night. He’s played with several different great artists over the years…

Mark: We’re going to have Billy Day on keyboards and vocals…Tim Towell is flying in from Austin Texas…

Randy: …he’ll be on Mandolin and electric guitar…

Mark: And we’re also going to have Dan Sebranek, who’s been a friend of ours for 20 years, coming in from Lacrosse Wisconsin, he’s played all over the world…he’s played with us and we played with him up in the Midwest. He’s a great vocalist and acoustic guitar player. He’s bringing his wife Mary with him, who is also a great vocalist. Joey Lavalle, a local favorite, will be a special guest…

Mark: …they’ll be 8 or 9 of us on stage counting everybody.

WPT: For people who come to see you often; what can they expect to see that’s different?

Mark: This will be a much bigger production than we usually do. The Theater is a beautiful venue and we’re hiring a great sound company…we’re going to try to make it the best show ever.

Randy: We’ll be releasing our 5th cd and selling them that night and playing some more recent material we’ve been working on as a surprise for the concert.

WPT: What type of songs can people expect that night?

Randy: We’ll be playing a wide variety of our favorites; Simon & Garfunkel, James Taylor, Jimmy Buffett and a couple of originals, of course.

WPT: How would someone visiting Siesta Key, get to the Venice Theater?

Randy: Take Stickney Point east, over the bridge off the island to Hwy 41 (Tamiami Trail) and turn right to go south. Veer right at the fork, onto the island to Venice, cross the bridge and you’ll find the Venice Theater at the corner of Business 41 and Tampa Ave.

Mark: As soon as you get onto the bridge, you can’t miss it…Venice Theater is written on the side of the building. It’s a very cool drive from the island that takes about 20 minutes. We encourage people to make an evening of it. There are plenty of restaurants within walking distance, so they can eat dinner then head to the theater, have some drinks, find their seats and enjoy the show.

WPT: When it’s all said and done, what will you consider a successful concert?

Randy: It’s going to be a party…a thank you to our loyal following…a memorable evening.

Mark: I hope people walk away thinking it was a great show.