“Worth It:” How the Siesta Breeze trolley came about for Siesta Key

Back about eight years ago, Helene Hyland brought some photos of the Anna Maria Island trolley to a meeting of the Siesta Key Village Association (SKVA) board of directors.

Hyland told members that Siesta needed a similar trolley. An open air trolley, Hyland, a realtor and longtime board member of the now-dissolved SKVA, believed, would help address many of the Key’s problem areas; it would alleviate traffic during peak season, help with parking woes, and enhance the beachy village feel of the Key.

“I thought it was something we needed to improve the quality of life on Siesta Key,” Hyland told Siesta Sand.

But she didn’t need to work too hard to convince her fellow board members. “The SKVA recognized the need for it immediately, and started its efforts then,” Hyland told Siesta Sand. “It just took some time.”

Implementation of the trolley took many meetings and discussions over the years, strong lobbying by several members of the SKVA, and ultimately the support of former SCAT Director Rocky Burke and County Commissioner Alan Maio.

The effort finally paid off on March 20, 2017, when SCAT launched the Siesta Key Breeze trolley, a free trolley service. The Breeze trolley will have been in operation for a year on March 20, becoming a vastly popular mode of transportation on the Key.

“I don’t think in anyone’s mind the trolley has not been worth it,” Hyland said. “The immediate response was so positive. We are extremely pleased with the ridership.”

The SKVA was dissolved last year and merged with the Siesta Key Chamber of Commerce, but the Chamber has taken the torch with continuing to market and promote the Siesta Key Breeze trolley to residents and tourists alike, Hyland said.

In 2016, the effort to launch a trolley hit high gear when SKVA’s board of directors appointed Bob Stein, publisher of Siesta Sand and longtime SKVA and Siesta Key Association board members, Wendall Jacobsen, general manager of Siesta Key’s Beach Bazaar and Russell Mathes, owner of the Daiquiri Deck as representatives to focus on meeting with county officials on plans for the trolley. At one point, Commissioner Maio commented to Stein that he had “hounded him for two years” on the topic.

“Even before I got involved, they were the champions,” added Stein. Later in the effort, two occurrences boosted the prospects for a Siesta trolley.

The first was the support of then director Rocky Burke, whom Stein had approached about the trolley. Burke even rode the SCAT # 10 bus, concluding that the bus-wrapped with a beach theme did not result in an increase in ridership on the Key.

Burke, who was involved in the effort to implement a trolley in Lexington, Kentucky, recognized the value of an open-air, free trolley circulator on the island. Burke was named as SCAT Director in 2014, and recently retired.

Burke was on board. “When Rocky said ‘Let’s go for it, everything started falling into place,” recalls Kendra Keiderling, Marketing, Communication & Customer Service Supervisor at Sarasota County Area Transit (SCAT).

The second major hurdle was when SCAT learned it could use the FDOT funding for the trolley, said Keiderling. At that point, smaller obstacles included planning a route, schedule, and securing a contractor.

The trolley has become a big success because of its short wait interval and circular route — and, most importantly, that it is “open-air, fun, and free.”

The sight of tropical-shirt wearing trolley drivers and bells ringing on the roads as passengers board and exit the trolleys has become a fixture on the Key, and something that tourists, families, and residents on the go look forward to.

“I have a neighbor who said she never went to Turtles,” said Hyland, who lives about three miles from the southern tip of the Key. “But now she goes outside and takes the trolley there, and it has become one of her favorite places for lunch.”

“And it has been helpful,” Hyland adds, “the tourist who don’t want to have a car when they are here, or are not wild about driving in traffic or trying to park in the Village.”

And the trolley has proved essential service “to tourists who don’t want to have a car or not wild about driving in traffic,” Hyland says. In addition, folks who don’t want to battle the parking challenge in the Village can also hop on the Trolley.

During season, with three trolleys in operation, a trolley stop at a given location every 20 minutes, Hyland says.

The county has made funding the trolley in the future a priority, Keiderling said, and is currently seeking proposals for a three-year contract for operation of the trolley.

The trolley has been so successful that SCAT, beginning on March 2, will be extending the weekend hours of the Trolley, until Midnight on Fridays and Saturdays. 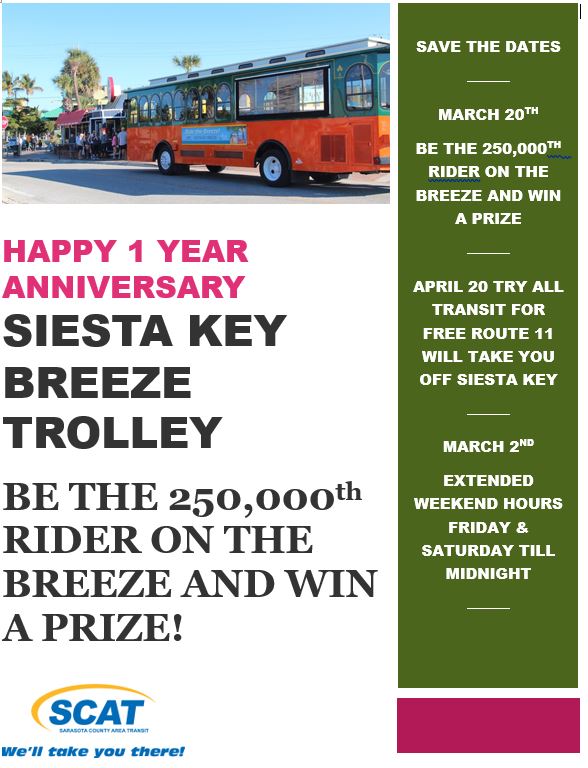